When America Is at War With It... 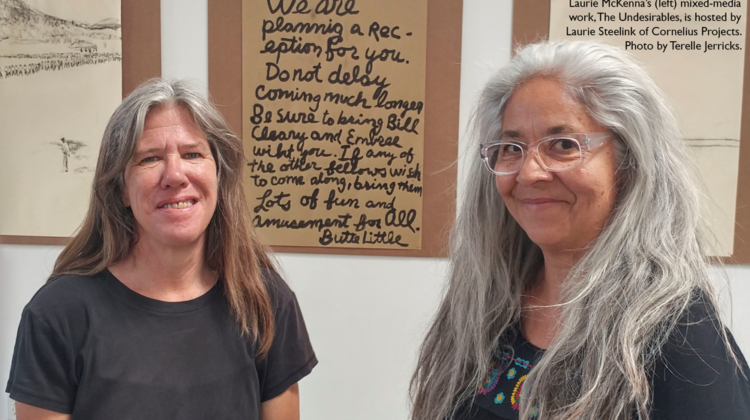 The Undesirables recalls the 1917 deportation of striking miners at Bisbee, Arizona

hen historian Howard Zinn thought about the relationship between artists and society in times of war, he said he thought of the word “transcendent.” And by transcendent, he meant that “the artist transcends the immediate. Transcends the here and now. Transcends the madness of the world.” Make no mistake, the United States is in a state of war … against itself.

Zinn’s meditation on the subject is what comes to mind with Cornelius Projects’ latest exhibition, which opened on Aug. 2.  The Undesirables is a mixed-media installation and event by Laurie McKenna.

The exhibit recalls the 1917 Bisbee, Ariz. deportation of 1,200 striking miners and supporters 200 miles away to Columbus, N.M.

The exhibit features drawings in charcoal on paper, renderings of quotes from significant figures executed plainly in black paint on cardboard and 1,200 pencil rubbings for each man deported. McKenna explained that she didn’t want people looking at the exhibit to be as refined as an oil painting. Instead, she wanted audiences to pay attention to the spirit of the times that inspired the work about the Bisbee deportation.

“It’s all distressed looking as if it traveled in time,” McKenna explained. “I wanted the paper and the cardboard to comment on messages without pretense. I don’t want to take all the baggage of what fine art is.”

In one instance, there’s a message written to Industrial Workers of the World attorney, Fred Moore, copied verbatim in  what on its face, sounded like a welcoming letter, except it was a very thinly veiled threat that referenced the earlier lynching of Wobbly Frank Little in Butte, Mont.

We are planning a reception for you. Do not delay coming much longer. Be sure to bring Bill Cleary and Embrae with you. If any of the other fellows want to come along, bring them. Lots of fun and amusement for all.

On the audio-visual side, there’s a television screen that displays turn-of-phrase sentences in timed sequences while a music composed by sound artist John Leidecker, called Solas/ Vexation, plays in the background. McKenna explained that the music was influenced by Ragtime music founder Scott Joplin and French composer and pianist, Erik Satie, who is described as being a part of the 20th century Parisian avant-garde.

Bisbee, with its population of 8,000 citizens in 1917, had the all the trappings of a company town except for the name. Phelps Dodge, the largest of three mining outfits there at the time, owned the town’s largest hotel and the town’s only hospital, department store, library and newspaper, the Bisbee Daily Review.

By this time, the Wobblies — officially known as the Industrial Workers of the World — had gotten the reputation of being a radical movement of the unwashed, transient, uneducated and foreign born mob. The Wobblies’ practiced a meat-and-potatoes kind of unionism. Theirs was an activism that fought private employment agencies that were taking advantage of the unemployed. They also fought free speech battles in the face of local government attempts to censor their speech.

Local governments, the chambers of commerce, religious institutions, and employer-operated dispatch halls were the forces against the union.

Anti-vagrancy and anti-syndicalism were the laws arrayed against them. Trumping up and manufacturing charges was another tool. If that didn’t work, police allowed or encouraged vigilante attacks on Wobblies.

Phelps Dodge orchestrated the deportation by providing lists of workers and others to be arrested to the Cochise County sheriff, Harry C. Wheeler. These workers were arrested and herded into a local baseball park before being loaded into cattle cars and sent to Tres Hermanas, N.M. The 16-hour journey was through desert without food or water. Once unloaded, the deportees, most without money or transportation, were warned against returning to Bisbee.

The morning of July 12, the Bisbee Daily Review carried the notice:

… a Sheriff’s posse of 1,200 men in Bisbee and 1,000 men in Douglas, all loyal Americans, [had formed] for the purpose of arresting on the charges of vagrancy, treason, and of being disturbers of the peace of Cochise County all those strange men who have congregated here from other parts and sections for the purpose of harassing and intimidating all men who desire to pursue their daily toil.

A similar notice was posted throughout the town on fence posts, telephone poles and walls:

At 6:30 a.m., the deputies moved through town and arrested every man on their list and any man who refused to work in the mines. Two men died …

At 7:30 a.m., the 2,000 arrested men were assembled in front of the Bisbee Post Office and marched two miles to Warren Ballpark. …  At the baseball field, the arrestees were told that if they denounced the IWW and went back to work, they would be freed. Only men who were not IWW members or organizers were given this choice. About 700 men agreed to these terms, while the rest sang, jeered or shouted profanities.

At 11 a.m., the El Paso and Southwestern Railroad brought 23 cattle cars to Bisbee. The posse of deputies forced the remaining 1,286 arrestees at gunpoint to board the cars, many of which had more than three inches of manure on the floor. Although temperatures were in the mid-90s, no water had been provided to the men since the arrests began at dawn.

Phelps Dodge executives seized control of the telegraph and telephones to prevent news of the arrests and expulsion from being reported. Company executives refused to let Western Union send wires out of town, and stopped Associated Press reporters from filing stories. News of the Bisbee deportation was made known only after IWW attorney Fred Moore, who met the train in Tres Hermanas, issued a press release.

With 1,300 penniless men in Tres Hermanas, the Luna County sheriff worriedly wired the governor of New Mexico for instructions. Gov. Washington Ellsworth Lindsey said the men should be treated humanely and fed. Then he contacted President Woodrow Wilson and asked for assistance. Wilson ordered U.S. Army troops to escort the men to Columbus, N.M. The deportees were housed in tents originally intended for use by Mexican refugees, who had fled across the border to the United States to escape the Mexican army’s Pancho Villa expedition. The men were allowed to stay in the camp for two months until Sept. 17, 1917.

McKenna’s displaying this exhibit in San Pedro wasn’t on whim nor did it occur out of happenstance. For McKenna, the 2016 general election was a disturbing spectacle in which she saw the scapegoating of racial and religious minorities and immigrants.

“It’s intentional for this to be here today in San Pedro because of some really dark events with labor struggles fighting against a larger power in the 1920s,” McKenna explained. “Before that, the IWW always had a strong presence at the port and shipping industries. Joe Hill, who is a hero in the labor movement, who wrote all the songs, lived here and worked here [in San Pedro].

McKenna said she always wanted this exhibit to travel because it was a way to get people to reflect on what happen before and what is happening now.

“You can educate any day of the year about some forgotten piece of history,” she said. “And, the simplicity of people working together made an agreement to go on strike. Somehow the simplicity of solidarity have gotten complicated and has failed. People only see the apparatus of unions, including members. In certain unions, members seem to only tolerate their unions instead of being their unions. It seems like we have to go back to square one because unions have become a bureaucracy.”

The biggest and best bulwark against this kind of atrophy in the labor movement is a radical direct democracy and the education of new members of the battles fought and won by their union. McKenna noted that the labor success and the passage of time is probably the biggest threat to the labor movement.

The installation is on view through Aug. 12