Cost of Avoiding Safety Could ... 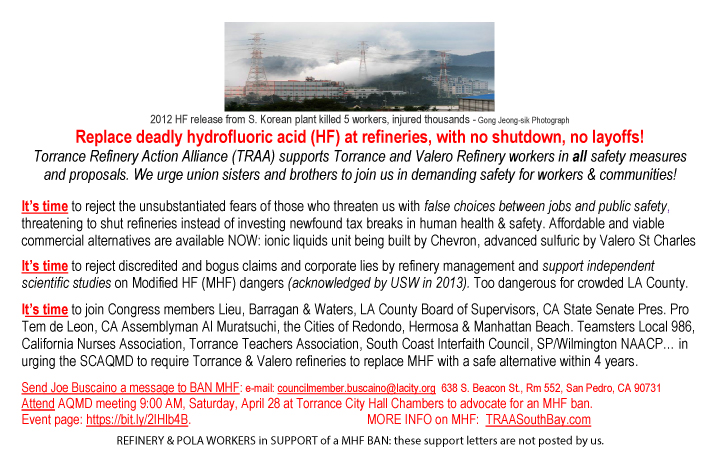 Cost of Avoiding Safety Could be Deadly

Residents of the greater South Bay and Harbor Area are weary of living in fear of an accidental release of hydrofluoric acid, HF, at the PBF Torrance and Valero, Wilmington refineries.

Both refineries employ modified HF, MHF, claiming it is safe. But, as Rep. Ted Lieu,  of Torrance says, we’ve been hoodwinked. An investigation by eight independent South Bay scientists proves MHF has no safety advantage compared to hydrofluoric acid. Recent conclusions by the U.S. Chemical Safety Board, the Environmental Protection Agency and the South Coast Air Quality Management District are consistent with this finding. Even the US Department of Justice sued ExxonMobil to enforce the Chemical Safety Board’s subpoenas for MHF information and the DOJ is appealing the court’s denial for subpoenas related to MHF.

Like HF, accidentally released MHF forms a dense acid fog that hugs the ground and drifts with air currents. The acid plume resulting from the release of 50,000 pounds of MHF in the settler tank, nearly struck in 2015, could have killed or seriously harmed tens of thousands of people in a 16 mile path… Even if 90 percent of the released acid were successfully “mitigated” by emergency systems, the remaining 5,000 lb. fog plume could still create a five-mile path of death or significant and irreversible harm. This is not “safe.”

Our earthquake-prone region is the second most densely populated area in the United States to have refineries still using HF and MHF. Well over 1 million people are threatened. All other California refineries perform alkylation with sulfuric acid, a liquid that remains on refinery grounds upon release. Chevron is voluntarily converting its only HF unit, in Salt Lake City, to use another safe alternative.

Refinery supporters, however, employ economic scare tactics to oppose MHF replacement. They inflate the estimated cost to $600 million to $900 million, even though technology providers’ estimates and ongoing builds and conversions show a $300 million to $400 million cost. Certainly affordable, given the recent tax breaks refineries received from Washington.MHF replacement will not cause the refineries to shut down or result in economic disaster in California. Jobs will be created during the construction, not lost.

Industry says deadly MHF must stay because replacing it would raise gas prices just like the 2015 Torrance refinery explosion did. However, unlike explosions and earthquakes, the market can plan for MHF replacement. California refineries would build alkylate inventory to fulfill demand during alky unit downtime, which will be shorter than the full transition period. If temporarily needed, alkylate can be — and commonly is —imported to California.  MHF replacement will be much less disruptive and downtime for the alkylation units at PBF Torrance and Valero, Wilmington will be shorter that the four-year transition time, much of which is dedicated to planning, design, and permitting. MHF unit shutdown times would be about six months for Torrance (build a new unit while operating the old), and one year for Valero (convert MHF unit to use safe technology).

PBF brags that it paid pennies on the dollar for a refinery worth $1 billion and predicts Torrance will be its most profitable refinery. Shareholders will not allow PBF to abandon the refinery; PBF never tells shareholders that it plans to when the subject comes up. PBF has not been flagged as a bankruptcy hazard due to AQMD Rule 1410. PBF doesn’t plan to abandon the refinery. It wants to scare residents into thinking they have a stake in preserving MHF. We don’t.  The California economy will survive the temporary disruption and benefit from eliminating the risk of mass casualties, lowered property values and massive area business losses from an accidental MHF release. The oil industry might accept the risk of a disaster as a cost of doing business, but the community won’t.

It’s time to call the bluff of the corporate blackmailers. It’s time to reject the discredited claims of interested parties in favor of the credible studies of independent investigations. MHF is just as deadly as the original.