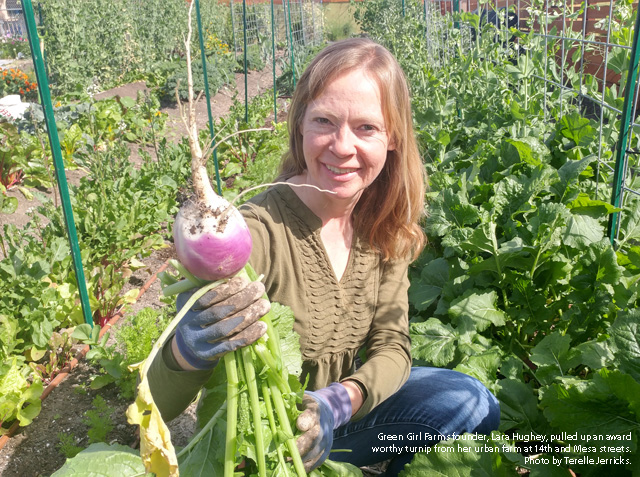 Building Intimacy and Connection One Garden at a Time

Feed and Be Fed is the organization that manages the garden on 6th Street in San Pedro.  Originally, it was managed by the Garden Church — in fact, Sunday services are still conducted in the garden lot. But little more than a year ago, the Garden Church decided to step away from managing the garden and create a community interface that was secular in nature. From this idea, Feeding to be Fed was founded.

Peter Rothe, president of Feeding to be Fed’s board of directors, said the nonprofit’s roots and enduring links in the Garden Church have sustained a philosophy of compassion as part of its mission.

“When you’re involved in a project such as this, you aren’t just giving, you are also receiving a deep satisfying experience yourself,” Rothe noted. “It is the connection made that is the reward. We grow plants here, but the most important thing here is the involvement and the engagement of the community.”

Rothe said connections are made through being and working in the garden and thinking about the environmental impacts of raising food on a small scale.

Feeding to Be Fed

Lara Hughey was the lead gardener for the church until March 2017, when Feed and Be Fed gained its nonprofit status and began managing the garden with its all-volunteer staff. But a year after the changeover, Hughey’s influence endures.

“She definitely set a certain tone,” Rothe said. “Lara did the basic designs of the garden. Without her help, this wouldn’t have been possible.”

Students from Port of Los Angeles High School and Marymount California University regularly volunteer in the garden. Sometimes up to 100 students come out to volunteer, Rothe explained.

“On any given day we could see volunteers come to pick or plant vegetables or do some other form of work and never see them again afterward,” Rothe said.

On a typical Friday, 50-60 people could come through the gates, while on First Thursdays up to 400 people would fill the garden. There’s usually some form of entertainment during the monthly art walk.

Speaking only for himself, Rothe said he could feel tired after working in the garden, but he never feels bad or sad.

“There was something basically human about working in the ground, growing food, nurturing something and seeing plants grow,” Rothe explained. “That’s the connection modern people have lost. We have this intuition that nonindustrial peoples somehow have something we don’t have. They have an intimate relationship with their environment. They have an intimate relationship with the source of their food on a very deep level. You don’t have to believe in metaphysics. You don’t have believe in a God to understand that relationships and intimacy [are] …  good for you as an individual and for us as a community. We’re modeling a certain kind of sustainability we feel should be a part of the future.”

Rothe doesn’t believe industrial farming will ever disappear, but he sees long-term viability in urban farming and the system that Feeding to Be Fed is modeling.

An example of the linkages provided by an urban farm is the symbiotic relationship between  Pappy’s Seafood restaurant and the 6th Street Farmer’s Market that happens every Friday.

Greg Morena at Pappys gives them vegetable clippings for composting and they sell him fresh vegetables and herbs. And it all happens without a carbon footprint such as use of a vehicle to deliver the produce or compost. Between Pappy’s Seafood and the farmer’s market, Feeding to Be Fed is composting 250 pounds of organic matter per week.

Rothe would like to grow larger and spread to other sites in San Pedro and include more restaurants. But for now, he said Feeding to Be Fed is doing just fine making do with the space it has.

A documentary filmmaker and consultant by trade, who helped print and radio newsrooms turn their journalists into one-man teams collecting and editing their own audio and visuals, Lara Hughey said she was a frustrated home gardener her whole entire adult life when she moved to San Pedro in 2008 from Brooklyn.

She recalled feeling that all she wanted to do was grow tomatoes like her grandma did at the family home in Oklahoma, when young Lara would spend summer days sitting in the tomato patch eating tomatoes.

So Hughey sought every opportunity to plant a garden. She could have just planted one in her yard and called it day. But she required more pasture to till. Hughey designed and installed some private gardens for people who hired her. She eventually created a demonstration garden at Crafted at the Port of Los Angeles. Then she was invited to design the 6th Street garden lot and  subsequently invited to become the Garden Church’s lead gardener when it first took over management of the downtown San Pedro lot.

More than a year ago, an angel donor purchased the vacant land at the corner of 14th and Mesa streets. A private farm existed intermittently between 2012 up until the time Hughey received the purchased land to turn into a fully functioning urban farm under the nonprofit Green Girl Farms.

As this point, Green Girl Farms is growing sugar snap peas (because everyone loves them), Swiss chard, fennel and tomatoes, cucumbers, leeks, cauliflower, two kinds of kale, broccoli, fava beans and beets of different colors. Hughey recited all the vegetables and herbs that were growing as though ticking off a Saturday morning grocery list. Green Girl Farms’ mission is to create a local food system in San Pedro by creating edible gardens out of empty spaces, then making the food available through local produce stands. The other half of what she does is education and she’s been doing it for the past 10 years.

Before Green Girl Farms, Hughey would stick gardens in people’s yards and containers. When she moved to San Pedro with her family she enrolled her eldest son into the San Pedro Cooperative Nursery School. There she discovered big metal bins that were designed to have plants.

“It’s a coop where parents have to contribute volunteer hours as a condition for enrolling their children,” Hughey said.

She recalled volunteering to be the gardener before anyone else could. They told her they needed someone to do the laundry.

“I can do the laundry and be the gardener,” she replied.

The experience of working with your children in a general setting opened her eyes. What she witnessed was connection. In this case, the children’s connection to the natural world around them and the food they eat.

“It was just the way the children were interacting with aspects of gardening,” she said. “They were finding the lady bugs and they were thrilled with the flowers and they never saw a yellow tomato before. It was eye-opening in a way that couldn’t be placed in a text book. They were getting so much more out of it.”

Hughey continued to find connection and a level intimacy through gardening not found in today’s typical transaction types of relationships.

Case in point: when Hughey began cultivating a square patch of earth in front of her house, she planted a tomato plant. She later customized the plot with a trellis and a little white fence around the square. Then she added other little plants around the original tomato plant. After awhile, neighbors walking by would ask her about gardening. She got enough of these questions that she figured she would learn how to do it. So, she took a 13-week course to earn a master gardener certificate in 2012. She has since gained the life time status as a master gardener after contributing 1,000 volunteer hours educating people about gardening.

A steady stream of volunteers come through Green Girl Farms, steadily harvesting and planting. Homeschooled children to adults of all shapes are welcomed. She said she intentionally keeps the prices as low as possible.

Back when she was growing more food than she could eat, Hughey learned about the vegetable stand that community activist Rachel Bruhnke started several years ago. Bruhnke led the charge several years ago to spur the growth of urban farms and gardens following the Occupy Movement in 2011. A part of the work was creating distribution networks for locally-grown fresh produce. By the time Hughey came around, Bruhnke had moved on to other related endeavors. She is running for the California District 70 Assembly in the June 5 primary elections.

She has also been looking into veteran health and the role gardening could play in rehabilitating veterans suffering from post traumatic stress disorder.

“People aren’t born messed up,” she said. “They are twisted that way by life’s circumstances.”

She hopes that if she’s elected, she could work on the adjusting the tax code to incentivise the establishment of community gardens and homeowners that transform their homes to have a zero percent carbon imprint.”

Bruhnke helped Hughey get the old vegetable stand in front of the Corner Store.

“There’s something about the land and being in touch with it and defending it and working it, and having access to it,” Bruhnke said. “That’s very empowering and it has a ripple effect because it is all connected.”

Bruhnke is a lefty through-and-through and is generally anti-any-system that perpetuates injustice and inequality. It’s the reason why she’s been involved in the local movement against the Iraq war. It’s why she supported the Occupy Wall Street movement in 2011. It’s also why she was at the forefront in extending the occupy movement plank to include urban farms and she started by first building an urban farm in her own front and backyards. From there, she helped establish vegetable garden at the Rancho San Pedro public housing and launch the original vegetable stand at the Corner Store in the White Point neighborhood and volunteered in the early days of the Garden Church. She’s no longer as active in directly establishing urban farms and gardens  as she once was, but that doesn’t mean she’s disappeared either.

“I changed direction,” Bruhnke said. “I was … planting seeds as you put it. Like Muhammad Ali, I float like a butterfly and sting like a bee. I definitely moved around various things because that was where the wind was blowing and opportunities came up around that time,” Bruhnke explained.

In 2012, Bruhnke got deeply involved in former Vice President Al Gore’s climate reality leadership program in Chicago and focused her attention on the Western transference of oil and all it had to do with the Harbor Area. She was still planting seeds and getting kids excited about agriculture through her teaching career at Port of Los Angeles High School. She founded the school’s annual Port of Los Angeles High School’s Green Festival.

Today, however, she is the Green Party’s candidate running against Democratic incumbent Assemblyman Patrick O’Donnell.

Bruhnke has ton of ideas she hopes to work on if elected. A major plank in her platform has to do with land reform involving housing and altering the district’s approach to land use. Her ideas are derived from her travels and studies in Latin America where land redistribution is a viable option.

Bruhnke has been eying the empty lot on 9th Street across from the YWCA, which has lain empty for the past 15 years. In bringing up the lot, she was pointing to the potential of that property’s ability to solve real community problems.

“How is it possible that you have the YWCA with poor women and children right across from empty land?” Bruhnke asked, rhetorically. “They could be growing vegetables on it. Just down the street from them is the Anderson Senior Center, where you have seniors who need to be engaged. There are some who still remember having to cultivate victory gardens during World War II.”