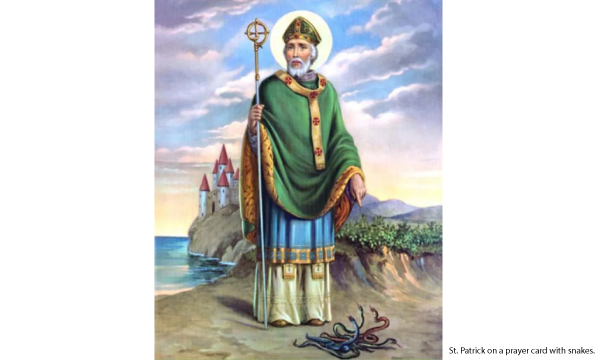 Much has been said about the decline of manufacturing in America. Yet, we still lead the  world in at least one category of manufacturing. I refer, of course, to manufacturing excuses to drink and party, particularly when it comes to celebrating other people’s cultural heritage.

As an example, let us consider St. Patrick’s Day, which is usually commemorated with corned beef and cabbage, green beer, parades and wearing anything green — especially funny hats.

With the exception of verdant derbies, there is at least some historical element to all of these. But it’s probably not what you’d think. This includes the career of the person who is actually being commemorated. To start with, there is no Saint Patrick — at least one canonized by the Catholic Church. He did exist, but is regarded as a holy individual, which is just short of sainthood.

Patrick was born in England and his first encounter with the country that he now personifies was not spiritually uplifting. As a teenager, he was kidnapped by Irish pirates and taken there to be sold as a slave. He learned the language during his six years of bondage, but eventually escaped and returned later in life as a missionary. He didn’t drive snakes from Ireland because there weren’t any. It’s at least plausible that he might have used the three-leaved shamrock to explain the concept of the holy trinity. He did bring Christianity to the Emerald Isle, and for at least 500 years that achievement was honored through special church services.

That’s it. No green beer, no parades, just a church service. Things were different elsewhere, where Irish emigrants used the day to commemorate their homeland. At first they did so while wearing the traditional color associated with St. Patrick — blue. It wasn’t until 1798, when Irish soldiers fought the British while wearing green uniforms, that the color became the symbol of Irish nationalism. When we wear green for St. Patrick’s Day now, we are  dressing as a soldier for a war that most of us have never heard of.

All celebrations of the day outside Ireland have been more focused on the culture rather than solemn festivities to commemorate a Christian missionary. The first actual St. Patrick’s Day parade was held in St. Augustine, Florida in 1601, and others followed in New York in 1766 and Philadelphia in 1771. They did finally get around to having St. Patrick’s Day parades in Ireland, the first one was in 1903.

As for food and drink, the association of corned beef and cabbage with St. Patrick’s Day has a rather surprising genesis: the mixed Irish and Jewish neighborhoods in New York. The Irish were not historically big eaters of beef, but enjoyed cabbage with a salted and cured pork called bacon loin. It so happens that traditional Jewish corned beef was similar to bacon loin and very inexpensive, so thrifty Irish families adopted it as their celebration meal.

The two immigrant communities had much in common, including being the target of prejudice by the Protestant majority, and many people commented on the solidarity between them. As the 1912 hit,  If It Wasn’t For The Irish and the Jews,  commented,

Talk about a combination, hear my words and make a note

On St. Patrick’s day Rosinsky pins a shamrock on his coat…

Corned beef and cabbage are available for sale in Ireland now, but mainly for tourists. As for green beer, it was invented in the United States in 1914, and it only works with German-style pale beers, not the traditional drinks of Ireland. Most traditional Irish beers were red in color, and if you add green dye it turns dark brown.

As for the most popular Irish beer, you can’t dye a Guinness green because it’s already black, and if you add dye it will still be black. But your lips will be green after you drink it; that will make “kiss me I’m Irish” more or less likely to work depending on who you ask.

So, what might you decide to eat if you’d actually like to enjoy a taste of Ireland? Soda bread goes back to the 1840s when bicarbonate of soda was first sold in Ireland, and it is still popular there. It’s probably the easiest bread for amateurs to make. It is delicious when served with real Irish butter. That variety along with New Zealand butters are vastly more rich and flavorful than the American counterpart, called Plugra.

If you want to make soda bread part of a meal, beef stew with a healthy amount of Guinness is a good idea, and you might make boxty as a side dish. This is the Irish equivalent of latkes, but isn’t a New World idea — it’s how the Irish ate potatoes in the 1700s. Cook them crisp and serve alongside that stew. Then open a room-temperature Guinness and play some music that is heavy on the harp and fiddle while you dine.

There are plenty of recipes online for the items I suggested and if I printed mine here you’d probably still go to the internet because that’s what everybody does these days. I’ll mention that I make soda bread with spelt flour for a healthier whole-wheat loaf that is actually more like the brown breads I had in Ireland. But if you prefer a white loaf, I won’t judge you. For that matter, if you decide to eat corned beef and cabbage while drinking green lager and wearing a plastic derby, I won’t judge you on that either.

Choose your own way to commemorate the culture of that green isle of poets, scholars, sages, musicians and some of the most epic partiers and hospitable hosts to ever walk the Earth.