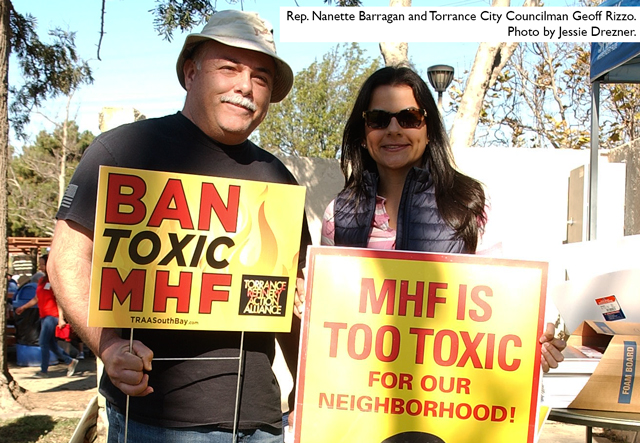 Hundreds of community residents, students and labor activists marked the the third anniversary of the Torrance Refinery explosion by protesting its continued use of modified hydrofluoric acid (MHF) in their refinery process.  The Feb. 17 demonstrations followed recent reporting in the Daily Breeze which previously exposed that the Environmental Protection Agency failed to enforce fines and cleanup first against Exxon Mobil and now against the new refinery owners, PBF Energy.

Local elected officials, scientists, teachers and residents spoke on the dangers posed by the continued use of MHF at the refinery. Some alluded to the worst chemical plant accident in Bhopal, India in 1984, when more than 500,000 people were injured and 8,000 died within two weeks.

The PBF Energy refinery in Torrance and the Valero refinery in Wilmington are notorious for their history of accidents, lack of restorative cleanup and fines mandated by the EPA and continued violations that make them unsafe to refinery workers and the community.

Teacher and South Bay resident, Sandra Viera, told the crowd, “The refineries have vast resources to cover up the truth, and push their message out. They pay lobbyists that can influence the EPA to ignore their own reports of toxic waste and safety violations at the refinery; it seems the refineries can even pay people to attend AQMD hearings.”

Pedora Keoo, representing the National Nurses United union, said, “Air pollution is a public health crisis in Los Angeles.  This is due to the ports, highways and refineries. What frightens me as a nurse is that we have this refinery here that contains hydrofluoric acid on site, a chemical that causes burn[s] and tissue damage on contact. This refinery still has problems: causing shutdowns, flares, and fires in 2015, 2016, and 2017. It is a ticking time bomb. I don’t even know if our surrounding hospitals can accommodate all the injuries if another [explosion] should happen that could be a catastrophe.”

Keynote speaker and scientist Sally Hayati led off by emphasizing, “Safe refineries save lives! That’s a great United Steelworkers slogan. An MHF replacement will create jobs, not eliminate them.”

“Our refineries claim to have all but eliminated HF dangers by adopting Modified HF, with its vapor suppressant additive,” Hayati explained.  “But Torrance Refinery Action Alliance’s investigation after the 2015 explosion revealed that MHF is the refining industry’s equivalent of ‘ultra light’ cigarettes, giving the illusion of safety without delivering it.  MHF is just concentrated HF, with so little additive it makes no difference.”

Hayati noted that  this past August, AQMD Air Quality Management District Rule 1410 staff had concluded that the refinery couldn’t prove MHF safety claims and that an MHF phase out within approximately five years was necessary to prevent health risks to a significant number of persons.

“Even modest levels of effort from a large number of people can win this battle,” Hayati said.

A significant new addition to the rally were high school and college students from Torrance, Wilmington, San Pedro, Lawndale and Northridge, along with teachers from an even broader list of cities.

By the end of the march and rally, the alliance collected hundreds of signatures of new supporters, organized the distribution of 150 lawn signs and sent hundreds of postcards to the AQMD to continue opposition to MHF from the community.

Other articles by Mark Friedman: