Whose City Is This? 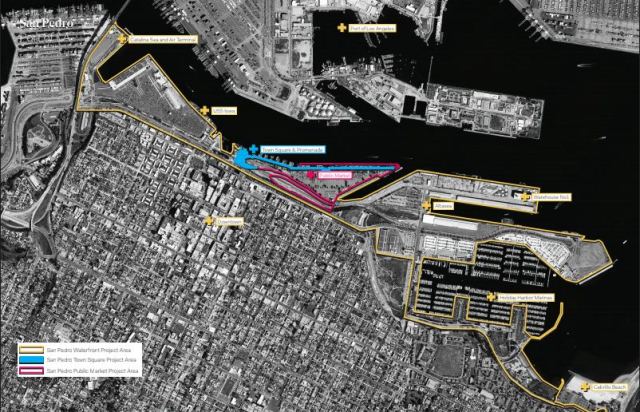 Whose City Is This?

LA’s economy is booming but will the Harbor Area benefit before the next bust? POLA releases new waterfront plan

At a Jan. 10 news conference, Los Angeles Mayor Eric Garcetti announced that the city’s economy is “a beast,” but some residents wonder if it isn’t a monster.

“We are powering Los Angeles’ economy to new heights every year, because we know that lasting prosperity means investing boldly in jobs, opportunity and growth,” Garcetti said. “The expansion of our travel and tourism sector, and the success of our port, tell the story of a city whose moment has arrived — and we will continue pushing forward as we expand our role on the world stage, and prepare to welcome the Olympic and Paralympic Games in 2028.”

The problem is that most of the citizens of this great metropolis are being edged out of the promise of prosperity by risings rents, stagnant job growth in poor neighborhoods and the emphasis on development along the west side to central city axis. This leaves everything below the 405 freeway, except the beach cities, out of the loop.

San Pedro remains the last bastion of affordable seaside living in most of the county. The last 10 new arrivals that I’ve met fled from Venice, Echo Park or East Los Angeles. Without prompting, they told me that they’d been “gentrified out.”

“ I moved here from the community that use-to be called Venice,” one of them told me.

I have been here in the town still called “Pedro” by locals for some 45 years and I still vividly remember the destruction of old Beacon Street with the civic promise of “redevelopment.” This took about 30 years to complete. That and the new Vincent Thomas Bridge to Terminal Island and the extension of the Harbor Freeway into town were all heralded as economic improvements benefiting the Harbor Area.

Yet by the end of the 1980s, with the closing of the shipyard, the offshoring of the tuna canneries, the demise of the fishing fleet and the rise of container shipping, the end result was the loss of some 30,000 blue-collar jobs.  That was half of the workforce at that time and the economic cost to the San Pedro Harbor Area was devastating.  Those jobs have never been replaced substantially.

During the same time period as the destruction of historic Beacon Street, the Port of Los Angeles proposed the development of a new marina in the outer harbor, with much of the same economic prosperity claims touted today for the Ports O’ Call waterfront. The big plan of that day was to take the outer beach at Cabrillo, on the south side, for a new marina. This would have eliminated San Pedro’s only ocean facing sand beach. The Point Fermin homeowners weren’t having it.

At a critical juncture a group of these radical homeowners actually chained themselves to the majestic pine trees to stop the port from bulldozing them — saving the beach and the old Cabrillo bathhouse. And, it took the POLA 10 years of negotiations with the community to decide to build the new Cabrillo Marina back where it is today in the West Channel. It then took another couple decades to finish building out the Cabrillo Way Marina.

What the port and city leadership don’t understand is that there are still people engaged in San Pedro’s civic life who actually remember this history and much, much more of the disputes between port bureaucracy and the community of Pedro. There is a latent distrust from years of false promises, broken treaties and lost opportunities that the current leadership fails to comprehend.

The odd saying that confuses the issue goes that, “Pedro wants progress but it doesn’t want to change.”  Another way of saying this more understandably is — we want to bring back those lost job opportunities from the 1980s without having to give up either our history or our culture. None of the plans presented in the last decade even come close to significantly addressing the 30,000 job deficit, not AltaSea, not the San Pedro Public Market and not automating the cargo movement in the ports.

As reported in this newspaper on previous occasions we reported that the Los Angeles Waterfront Alliance, LAWA, of Jerico/Ratkovich developers, had privately presented the new design plans for the Ports O’ Call project area.  Those plans were not presented by the port at its Feb. 1 commission meeting which agendized a waterfront development update.

As explained in Paul Rosenberg’s article in this issue the port presented it’s defense of its actions to evict certain tenants while claiming it was the sole discretion of the developers to choose who to invite back.  This statement clearly confuses the issue of whether Ports O’ Call restaurant, with its 100 employees, will be evicted come March 1 or whether there’s some “ongoing negotiations” taking place and just who decides if these jobs will be lost to the promise of “future prosperity.”

The port has also promised for several months to give the San Pedro community a public report on the waterfront development plans and has now committed to a March 20 presentation at the Warner Grand Theatre where all of the people, and not just some, can see for themselves the “new plans.”  While we have just recently viewed these plans, I am not going to make any judgment on what the developer’s architects have imagined, but we have posted those plans on our website for all to review prior to the public forum.

What I can say from just a brief review is that these plans appear to be significantly different from the concepts previously presented with a shifting of where the San Pedro Fish Market is placed, with the added component of moving the USS Iowa to the south end of the SP Slip, where the fishing fleet docks. Anyone interested in commenting on this project should review these just released documents before coming to the meeting.

In the end, whatever your assessment of the new project may be the ultimate discussion is whether or not the promise of prosperity will actually come to pass without forfeiting both the history and culture of this town that now seems to be the last best place to live next to the coast in all of Los Angeles — it’s a dubious distinction.