From War to Love 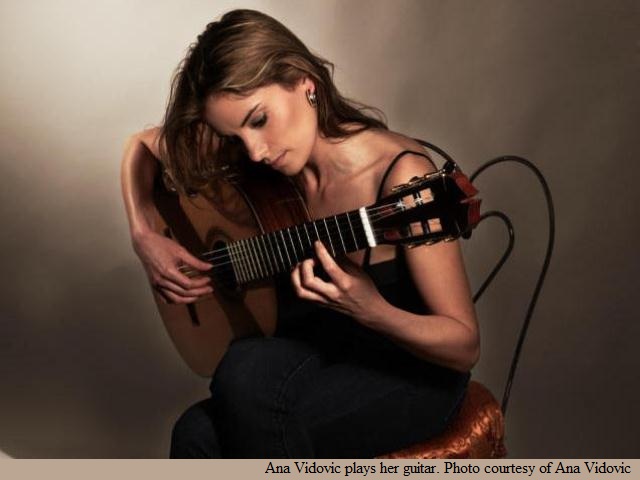 From War to Love

Ana Vidovic grew up playing music to the sounds of a civil war outside of her window.

She was born in Karlovac near Zagreb, Croatia. Vidovic’s parents gave their children their full support, encouraging them to continue to focus on music, despite growing up in the middle of the Serbo-Croatian War. Music provided an escape, both spiritually and physically as the country was consumed by bloody conflict between 1991 and 1995.

“I was fortunate to have [music] because it is the most beautiful thing,” Vidovic said. “I was grateful to have it and not  have to think about all the other problems. Music was everything to me, without it I don’t know what I would have focused on. All the schools were closed. So it was good to have my parent’s support.”

She started playing guitar at 5. Vidovic’s touring career has taken her around the world since she first stepped on stage at age 7 in 1988. She performed internationally when she was 11 years old. At the age of 13, she became the youngest student to attend the National Musical Academy in Zagreb.  Vidovic’s reputation in Europe led to an invitation to study with Manuel Barrueco at the Peabody Conservatory at Johns Hopkins University in Baltimore, Md., where she graduated in 2005.

Her dedication afforded her the opportunity to study abroad. At 21, she came to the United States. She is the winner of numerous international competitions and has performed across the United States, Europe, Israel, Canada and Japan. She has recorded six CDs and released a DVD titled, Guitar Artistry in Concert. When travelling for performances, the musician makes time to teach master classes, as well as private lessons.

Now, at age 37, Vidovic has earned prominence for her tone, precise technique and well-defined phrasing. She has an impeccable, yet relaxed style. With her ease and agility performing advanced tremolos, for example, her skills emerge with a quiet escalating effect, offering room for the mind to roam.

Vidovic is multi-faceted and receptive to diversity. She arranges music for guitar and she explores other genres personally, playing rock, jazz and pop. People like to hear popular songs on guitar, it  brings the guitar closer to them.

“I will play some Sting or The Police for example, for fun and do some arrangements for guitar,” Vidovic said.

To keep things fresh she performs different musical styles, including baroque, Spanish and Italian. Bach is her favorite composer, which she will perform, including others such as Mauro Giuliani, Astor Piazzolla and modern compositions by Agustin Barrios Mangore. She also features an especially sweet version of the Beatles’, Yesterday.
In celebration of the love and the inspiration that follows Valentines Day, the Warner Grand Theatre is presenting classical guitar virtuosa Ana Vidovic in a solo recital.

“It was a pleasure to work with the fabulous teacher James Hunley who initially invited me to perform for his guitar studio last year,” Vidovic said in an email. “I also had the opportunity to meet his very talented students and hear them play…. I’m particularly happy that all the proceeds from the concert will fund the scholarships for James Hunley’s guitar studio and his wonderful students. They work very hard and deserve the funds that will help them achieve their goals…. That, to me personally, is the most rewarding gift.”

Hunley’s investment is especially important because it is so difficult to get started in classical music. Scholarship recipients are scheduled for a special performance before Vidovic’s concert.

We live in a culture of constant stimulation and distraction. Finding an antidote, a respite to settle the mind, is necessary to allow thoughts to roam beyond conflict.

Quite often, music is the muse. And that’s where this classical guitar virtuosa Ana Vidovic enters. Vidovic’s hope is that everyone will find something they enjoy listening to.