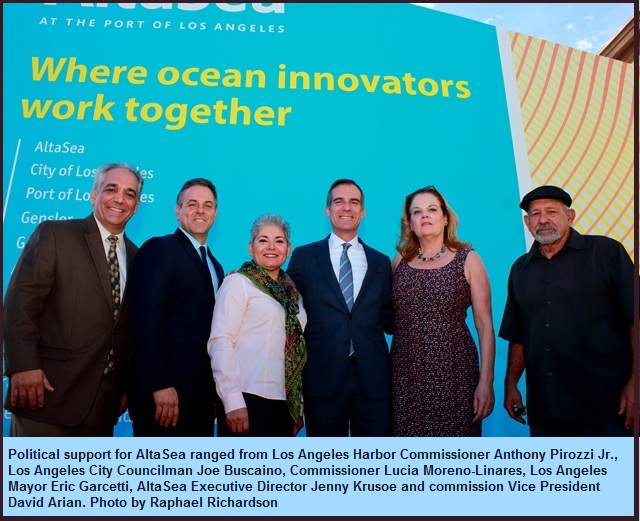 In the history of the world, there has never been an industry, a marketplace or an economy that’s been created without a significant investment by the public sector.

The international trade that connected the New World with the Old would not have been created without the support furnished by monarchies during the age of exploration. The Industrial Revolution would not have been a revolution if not for government desire for expansion through colonialism and imperialism. Manifest Destiny in United States would not have been manifested if the federal government had not seized and redistributed territory in the march westward.

Even the history of our port in the Los Angeles Harbor shows that government investment through the creation of a free port was the dominant ingredient in the robust economy we see today in Southern California; government projects at the port included the federal breakwater and other investments like bridges and dredging. This has been the pattern throughout the development of most of our city.

It is in light of this history that the unveiling of the La Kretz Innovation Campus at Berth 58, down the street from the historic Warehouse One, on Dec. 11 was something to behold.

In his speech at the unveiling, Los Angeles Mayor Eric Garcetti sounded notes of caution and optimism as he communicated his vision of the future, the Port of Los Angeles and AltaSea’s role in shaping that future.

This day was a celebration of the La Kretz Blue Economy Incubator, a key component of AltaSea’s ocean innovation campus.

“AltaSea literally pulled back the curtains at our facilities in the Port of Los Angeles, revealing our next major step forward as we launch construction of the La Kretz Blue Economy Incubator,” AltaSea Executive Director Jenny Krusoe said.

Garcetti communicated that this campus was a catalyst for  greater collaboration with the private sector in the investment in new technologies and innovation.

The mayor suggested that this new way forward in economic development through blue technology, clean sea technology, would rely heavily on philanthropic investments, as well as, emerging tech start-up companies focused on what is called “blue tech” research and development.

This private-public incubator approach is being touted citywide as the cure for the loss of industrial manufacturing jobs within the past 30 years in Southern California. It is heavily reliant on the speculative buy-in from developers, academics in the marine sciences, the port and the City of Los Angeles.

Of the more than 300 officials and civic leaders who attended the unveiling of the La Kretz Innovation Campus, a reflection of AltaSea’s significant political and business support, conspicuously missing from the gathering was the environmental community that should have naturally been there.

Also conspicuous was the silence on just how much the La Kretz Foundation donated and how far along the path AltaSea is in reaching the $549 million goal of bringing AltaSea from concept to reality as this paper reported in 2014.

Since that time, the Port of Los Angeles has stepped up to offer greater support for this project. Tim McOsker, the legal counsel for AltaSea, said that with the renegotiation of the lease with the port, AltaSea’s budget has been drastically readjusted down to some $150 million, which doesn’t include the port’s investment.

This change suggests there’s been a pivot from the more grandiose plan rolled out several years ago to a more practical approach that is now being promoted by Krusoe and the new board.

But this pivot doesn’t immediately mesh with the mayor’s grandiose vision of a campus where scientists, educators, policy makers and entrepreneurs work together to accelerate marine research.

Indeed, neither the mayor nor councilman for District 15, Joe Buscaino, would or could reveal any major developers or any of Los Angeles’ billionaires that they have personally lobbied to support the project, even though they are leading the charge to support it.

Since the Oct. 19 Bisnow developer breakfast presentation, which focused primarily on AltaSea over other waterfront opportunities, and then the following week’s tour by the esteemed Brookings Institute in San Pedro, a great expectation has been laid upon the success of this project and Krusoe’s talents in leading it forward.

AltaSea is a visionary project that has taken 17 years to emerge through the efforts of many people, including the former director of the POLA Geraldine Knatz, who was absent from this event, and Camilla Townsend, the chairwoman of the AltaSea board.

Other developments in the harbor region have also been slow to move forward like the Ports O’ Call waterfront redevelopment, the second phase of Crafted at the POLA or significant housing projects. However, the arrival of SpaceX, a Tesla company, and the announcement of Molina Healthcare moving into the Topaz building on Sixth Street in downtown San Pedro, have all raised the temperature on speculative values.

Krusoe and others are expecting this excitement to flow over to the AltaSea project. “AltaSea is excited to be part of the emerging LA Waterfront Innovation District,” she said.  It is an entirely new designation for what some at the port see as a spin-off from their zero-emissions plans for clean technologies.

Still, the future of such an enterprise remains dependent upon how much of the marine science and environmental communities embrace this concept and whether the universities and colleges associated with Southern California Marine Institute join in to relocate there. The institute has been courted almost from the very start and Krusoe said that they are scheduled in for the next phase of the warehouse development. The institute’s relocation to the AltaSea site will probably be the key element to its future success.

At this point, it would be very significant if the State of California or Los Angeles County invested in some portion of the infrastructure for AltaSea. But Krusoe is not there yet. She has focused like her predecessor on the private sector donations that now seem to be flowing in on a significant level.

So, our city and county’s political elite will continue to cheer on AltaSea from the sidelines until the county or the state enters and becomes a game changer.