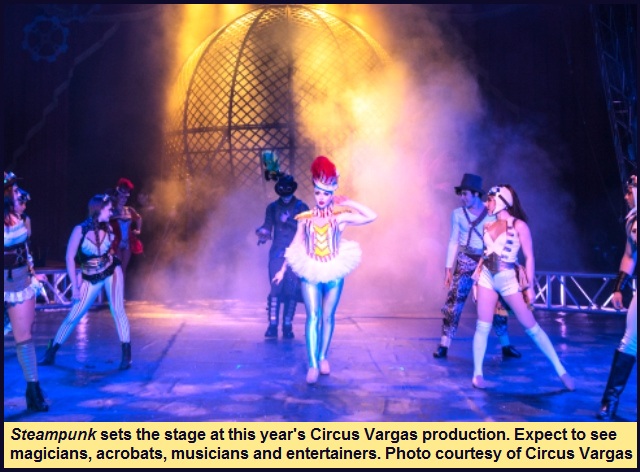 The circus that emerged in the 19th century, complete with dancing lions, tigers, elephants and bears are a thing of the past. These days, circuses are reinventing the performances with imagination and wonder. Circus Vargas is no different.

It has been around for nearly 50 years. Circus Vargas’ new show, Steam Cirque exemplifies the circus industry’s blending of traditional acts with modern requisites. This year, San Pedro will host Steam Cirque from Nov. 16 through 20.

“We love to come to smaller communities and we are excited to be right by the USS Iowa Battleship,” Quiroga said.

Steampunk is a subgenre of science fantasy that incorporates technology and the aesthetic designs inspired by 19th century industrial steam powered machinery—for anime fans, think Fullmetal Alchemist or Cowboy Bebop or even the 1999 Will Smith and Salma Hayek film, Wild, Wild West.

Like  anime and film, Steampunk is often set in an alternative timeline of the British Victorian era or the American “Wild West,” in which steam power remained the dominant technological medium of the present age or exists in a fantasy world that similarly employs steam power.

The aesthetic features of Steampunk are anachronistic technologies or retro-futuristic inventions as people in the 19th century might have envisioned them, like the huge mechanical spider in Wild, Wild West Smith’s character had to defeat.

The show, whose storyboard took a year of planning, is dynamic. It’s focused on steam punks.  Nobody knows for sure who they are but they are trying to live forever.

The show starts with all the actors coming out with the traditional ring master before steam punks try to take over the circus. It becomes a battle of the talents, where the audience must decide whether traditional acts — such as trapeze flyers, a bow- and-arrow act and a caged motorcyclist — or more modern acts are deserving of survival. “Maybe we are doing something amazing, but … a text is more important,” said Cavegana, 25. “[Audiences] see everything online and they don’t get really surprised [by the act].

Cavegana also performs comedic acts with his brother, Jones. Though they are considered clowns, they don’t wear the typical makeup, red nose and big shoes. The Italian duo has traveled the world before, joining the now-closed Ringling Brothers Circus. Two years ago, they signed on to Circus Vargas.

The Cavegana brothers are fourth-generation performers. Their family is one of the biggest circus families in Italy. Originally, the act involved horses. Their grandfather was the first generation clown. He played the trumpet and inspired his grandchildren to also use music as a form of entertainment. Jones plays five different instruments. In one act Jones plays classical music, while Steve Cavegana tries to play more modern tunes. All while the audience roots for one brother or the other.

In another act, Steve Cavegana juggles four Chinese yo-yos, called “diablos” for two-and-a-half minutes, while his brother plays music in the background.

Katya Quiroga, co-owner of Circus Vargas, said the biggest challenge is just letting people know that they are still entertaining audiences and that they don’t plan on changing that anytime soon.

“We aim to make it fun for the whole family,” Quiroga said. “It’s everything you want to see when you take your family out.”

Like many circus performers, Quiroga’s family has been part of the circus for many generations — nine, to be exact. Her father is from Italy and her mother is from Holland. In fact, Quiroga and her husband, Nelson met at Circus Vargas in 1989. These days, they own the company that started their careers.

“We love what we do,” she said. “It is a unique form of entertainment and art…. It’s a very big part of growing up and making new memories.”

Come early and be part of the interactive pre-show that brings spectators into the ring; stay later and take photographs with your favorite entertainer.