How Soon? How Much? 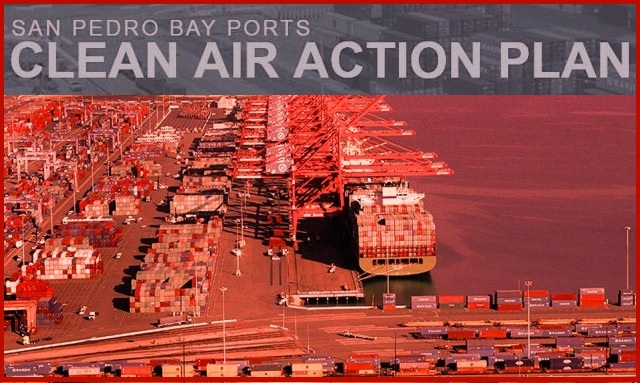 How Soon? How Much?

The missing pieces of the 50-year environmental battle

On Nov. 2, the joint commissions at the ports of Los Angeles and Long Beach voted unanimously to approve the Clean Air Action Plan 2.0. Los Angeles Mayor Eric Garcetti  called this a visionary action that would affect the lives of millions and those of generations to come. Long Beach Mayor Robert Garcia  mostly agreed. But this document was signed despite vocal criticism from the community advocates who have been pushing for policy changes for decades.

The Clean Air Action Plan is in direct line with a growing policy shift that has been taking place for the past 20 years here in the San Pedro Bay. It is also in direct line with the climate change initiatives of Gov. Jerry Brown and the California Legislature, for example, the extension of California’s cap and trade program and the policies of multiple agencies from the California Air Resources Board to the South Coast Air Quality Management District. The problems with the visions of zero-emissions future is the strategy on how to get there and the $14 billion cost. This is where the community, environmental groups and some labor activists part ways with the ports. Yet the accomplishments of the existing clean air action plans and the activism from the local area have been recognized around the world.

This division might appear to be a difference between tactics and strategy, but it belies a deeper rift in the state and city governments: Blue Democratic leaders confronted by more progressive, vocal and organized Bernie-crat activists demanding action now, not more promises on zero-emmission later.

The interim step seems to be the promotion of natural gas vehicles as the port claims truly emission-free trucks are not ready for prime time. Yet other agencies, like the transit authority, are almost 100 percent emission-free now (See front page story in this issue for more on this).

However, the truth of this claim could be easily ascertained when the two ports issue a joint request for proposals calling for the cleanest technologies available to replace diesel trucks and other mobile yard equipment for a pilot project. Either the zero-emission technology exists now or it doesn’t.

With all of the current buzz about promoting blue tech solutions and STEM education, it would seem to be incumbent upon the two ports, the two cities and the State of California to host a clean tech convention just to see who shows up and see what works.

What has been left out?

What was also left out of the Clean Air Action Plan meeting was any kind of official recognition of the community activists from the San Pedro Bay communities that have fought with the ports for decades on environmental issues.

Yet, at the Moving Forward Conference in Carson recently, Christine Loh, former undersecretary for the environment in Hong Kong said, “The inspiration for us [was] in looking at ships started in Long Beach.”

Dennis McLerran, the Environmental Protection Agency’s regional administrator for Alaska, Washington, Oregon and Idaho during the Barack Obama administration, told similar stories of how [community] actions in Southern California helped initiate change all along the West Coast. The actions of local environmental justice groups have spread far and wide since the clean air issues being addressed here have  global implications. Everyone knows this, but little credit is given to community leaders who pressed our governments to change.

For the past 20 years leading all the way to the Clean Air Action Plan update meeting in 2017, the entire focus has been on cargo movement. From the Alameda Corridor to China Shipping, to the Green Omni Terminal and to the 2006 Clean Air Action Plan, everything was about global trade. Not much was said about human mobility in the greater San Pedro Bay region. The priority placed on goods movement above environmental impacts is the core conflict facing the ports or more precisely, profits before people. This is similar to the dilemma we faced a decade ago when the issue was good jobs versus green solutions. At the time, it was incomprehensible that blue collar unions would ever embrace environmental goals. Yet they now have. The solution to this current dilemma should not be an either/or proposition, but a both people and profits proposition.

The missing piece of the Clean Air Action Plan 2.0 is a comprehensive human mobility plan that takes a look at how the ports take cargo off the streets, how people move into and out of the harbor region, like the million passengers coming from LAX to the cruise ships each year, or the 800,000 tourists that visit our waterfront. This is going to take more than bike lanes and road diets to solve as the cities continue push for higher density housing to address yet another crisis.

No one seems more attuned to this global impact than California’s Gov. Jerry Brown, who traveled this past week to meet with religious leaders at the Vatican before pushing for greater climate collaboration between California and the European Union amid hundreds of members of the European Parliament and European Commission in Brussels, Belgium on Nov. 7. as part of a 10-day European tour. Later on his tour, in Stuttgart, Germany, Brown worked to further strengthen California’s ties with the German state of Baden-Württemberg, co-founder of the Under2 Coalition.

In comments while on this trip, Brown noted that “California has carved out a unique path,” despite it being a subsidiary of the federal system in the United States.

Local port authorities, charged with carrying the state along that path, don’t address the human impact that’s here right now. That is the concern regarding the Clean Air Action Plan 2.0; as passed, it comes down to now versus later and how it gets monitored.

The bigger question of course is where will Los Angeles and Long Beach get the $14 billion to pay for any of this while the Trump regime slashes the federal EPA’s budget as it follows the path of climate change denial?