Harbor Gathers to the Call of ... 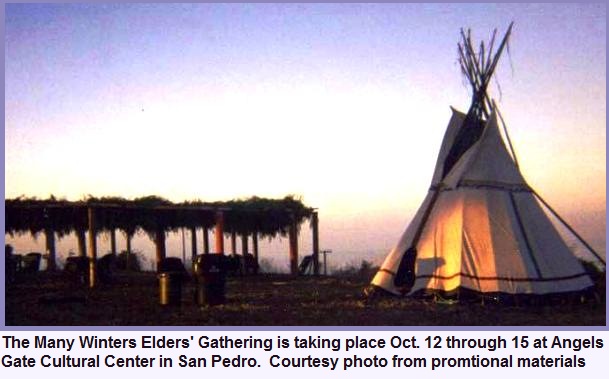 Harbor Gathers to the Call of the Elders

Columbus Day was a flash point on the 525th anniversary of his voyage to the New World. Recently, the Los Angeles City Council voted 14-1, Councilman Joe Buscaino opposed, to change Columbus Day to Indigenous People’s Day. But the struggle isn’t over for indigenous people. The education system still largely ignores native histories.

“The history of this country is not told properly,” said John Funmaker, a community activist and spiritual Ho-Chunk leader. “It’s often ended in violence.”

For Native Americans, oral history is and has been a way to heal and reconnect with their ancestors. It offers a pathway to generations through time, identity and culture. Many Winters Elders’ Gathering, Oct. 12 through 15 at Angels Gate Cultural Center in San Pedro will offer that opportunity for Harbor Area residents.

“The elders will bring their history through words, songs, dance,” said George Funmaker, John’s son. “We wanted to come back to the earth and return back to our culture through our elders…. Being in the city, we are disconnected from a lot of the culture. That’s why it’s important to have this event.”

The mission system, for example, still is venerated in California, ignoring the thousands of families torn apart when children were displaced and forced to assimilate Eurocentric standards. The Catholic church even canonized Junipero Serra who forced the conversion of many natives.

“For us, the California missions are the equivalent to concentration camps,” said George Funmaker. “There was a lot of abuse through the mission system.”

In fact, indigenous people were outlawed from practicing many of their traditions until 1978, when President Jimmy Carter signed the American Indian Religious Freedom Act.

“We suffered a great trauma at the hands of the U.S., the government and the church,” George Funmaker said.

“It’s offensive to use natives as mascots,” George Funmaker said. “We are the only people who they can do that to.  It’s a stereotype that [implies] that we are inferior…. When we are made caricatures, we are made less than humans.”

George Funmaker sees this moment, with the struggle to change Columbus Day to Indigenous People’s Day back in the forefront, the rollback of environmental protections and the divisiveness caused by the current administration, as the best time to bring back the gathering

“What better time to start this with the attacks on the environment [and on] the native people,” George Funmaker said.

While indigenous people are diverse in language and culture, there is one thing natives have in common: their respect for Mother Earth.

“All tribes have reverence for the natural world,” George Funmaker said. “Most natives want less development. We want to preserve the natural environment as much as we can.”

The gathering serves as a reminder that native people are still here and are part of contemporary society.

“We are looking at it as a ceremony of healing [and] people coming together to share their medicine,” George Funmaker said.

Their spiritual medicine is in the form of oral history, food, prayer and dance. Funmaker likens the event to a professional conference without the classroom setting. It will include seminars, booths and sweat lodges. Alcohol, cameras or other recording equipment will not be allowed.

“Humanity, compassion [and] respect are shared spiritual values,” George Funmaker said. “When you attend a ceremony there is no schedule. Things just happen. Come sit down and just listen to elders. We have a lot to offer and I think it’s come full circle to where the dominant society needs to listen and learn from the indigenous people.”

Fighting Back Against Genocide George Funmaker discusses how fire is one of the four elements of the Many Winters Elder’s Gathering.

The Many Winters Elders’ Gathering was started in 1992 as a response to the 500-year celebration of Christopher Columbus’ “discovery” of America. John Funmaker was one of the founders of the event.

“They wanted to show he didn’t discover anything,” George Funmaker said. “‘Many Winters’ refers to our survival of 525 years of colonization. We have survived many winters and we are still here.”

“The teachings of native people are relevant to what is going on in the world,” he said. “The path that we’ve been led to is very destructive.”

The senior Funmaker was referring to the lack of reverence for Earth, climate change, the divisiveness that seems to be prevalent in today’s society and the value for materialism, which is often trumped over kindness and a love for nature.

Angels Gate Cultural Center’s Executive Director Amy Eriksen said she was interested in bringing back the event to the center, but waited for the right time.

“What I realized was [that] it will come back when it’s supposed to,” Eriksen said. “Our mission is to bring events to the community that include every culture that walks through our community.”

Angels Gate Cultural Center is a site where members of the Tongva nation came down from the foothills to do different types of fishing. It was a place of sacred gatherings that has remained a part of nature throughout the years, she explained. The site also is connected to three of the four directions: water, land, air and fire. Four is a special number for many indigenous nations.

“We have committed to organize the gathering for four years and hopefully beyond, honoring the four directions, the four colors, the four seasons, the four stages of life and so on and so forth,” George Funmaker explained.

The narrative of the event is simple: empathy, understanding and the courage to share and care for each other, Eriksen explained.

“These are things we really need in this world,” she said.

The event falls into their mission also as an art form, of which oral tradition is in and of itself.

“It’s a time of renewal and a chance to share stories and language that aren’t always used,” she said. “It’s really a handing off to the younger generations.”

Passing of the Torch

As a young man, George Funmaker was teased in school for his long hair and his uncommon surname. He was often the only Native American in his classroom.

“We live in two worlds,” Funmaker, now 34, explained. “For native youth, it’s a constant struggle with identity, having to be part of a lot of other cultures.

Following his father’s footsteps, the younger Funmaker has been active in his community, not only as counselor, but also rallying and fundraising to support issues that impact Native Americans and the environment. This past year, he fought against the Standing Rock Dakota Access Pipeline.

“I pride myself in having a very spiritual, traditional family that is also very humble,” John Funmaker said. “Language, traditions, legends, all of them, I’ve carried them and I’ve passed it onto my son. He knows the importance of our culture. It’s the only way that we are going to survive.”

“This young group of organizers is making their own way,” said Laurie Steelink, the founder of Cornelius Projects, an art gallery in San Pedro. “It’s really grassroots …. There is a newness, freshness.”

For many indigenous people, the gathering is an opportunity to reconnect with their roots. Steelink, for example, has taken the opportunity to reconnect with her heritage that’s she’s been separated from for some time. Her biological mother belonged to the Akimel O’odham nation from Arizona, but she was adopted as child by a non-Native American family when she was 6 months old.

She grew up in a loving home, but she always had a sense of being outside. Being native was never kept secret from her. When she grew up she sought out information about her lineage and was able to find her birth certificate. Later, she met her birth mother after her adoptive mother died. By being part of the Many Winters Elders’ Gathering Committee, she is relinking with native cultures.

She recently hosted Gathering for the Gathering, a fundraiser to help pay for the expenses related to the Many Winters Elders’ Gathering. The fundraiser was an intimate exhibition of donated art works by contemporary indigenous artists. As an artist herself, she is starting to notice connection within her own work.

“I feel like I’m a child in this community and I’m learning, and I want to approach my education with respect,” Steelink said.

And, the learning is not limited to people with indigenous roots in America. Elders from across Turtle Island [i] (Turtle Island a term used to refer to North America) will share their teachings to foster a greater understanding of traditional indigenous values and spiritual beliefs.

“Mitakuye Oyasin[ii], we are all related,” said John Funmaker. “Everything is connected.We humans, animals, plants, trees are all related. Whatever you do to your brother you do it to yourself. When we see each other as separate beings that’s a very destructive way of thinking.”

Angels Gate Cultural Center has made a commitment to host the event for four years. They are expecting between 500 to 1,000 attendees.

The Many Winters Elders’ Gathering will take place Oct. 12 through 15 at Angels Gate Cultural Center, 3601 S. Gaffey St., in San Pedro. The event is free and open to people unfamiliar with indigenous cultures.

[i] Turtle Island is a term used to refer North America. The term comes from creation stories of some East Coast native nations, such as the Iroquois. According native mythologies the Great Spirit created their homeland by placing earth on the back of a giant turtle.

[ii] Mitakuye Oyasin is a phrase from the Lakota language. It reflects the worldview of interconnectedness held by the Lakota people of North America.