Eternal Vigilance is the Price... 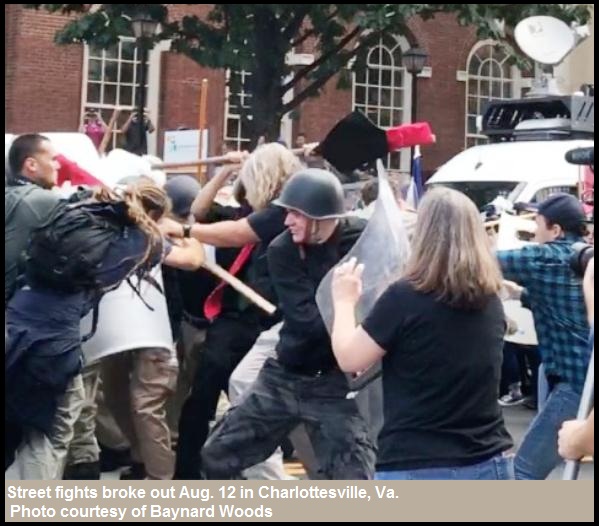 Eternal Vigilance is the Price of Liberty

Charlottesville, white supremacy and Columbus —And you think it can’t happen here?

Who would have thought that a Civil War statue of Gen. Robert E. Lee would become the violent focus of hatred and the rallying point for white supremacists and neo-Nazis at this point in American history? Didn’t we bury the last of that conflict decades ago, along with the last living veteran of our bloodiest war? Not really. As William Faulkner wrote, “The past is not dead, it’s not even past.”

As Americans, the one thing you can always count on is our love of arguing amongst ourselves — particularly when it comes to politics and national symbols.  But the adoption of Confederate symbolism by the racist white extremists of this country is more than just a disagreement over history.

It is a troubling reoccurrence of the unsettled issue of America’s “original sin”— slavery. As such, it is an onerous reminder, not only of slavery’s bondage and subjugation, but also of the oppression that has continued over the years. We cannot afford to look upon this from an ahistorical perspective.

The rise of Jim Crow laws after reconstruction, the second iteration of the Ku Klux Klan 50 years after the war and the continued racism confronted in the Civil Rights era are all still part of this on-going struggle over this central issue of American identity — freedom, equality and liberty.

The curious thing about the majority of these Confederate memorials, as catalogued by the Southern Poverty Law Center, is that most of them were erected between the 1890s and the 1920s, well after the war’s end and mostly in Southern states, but oddly, even in some Northern ones too.

The number of Confederate statues grew again  between the two world wars in which the participation African American workers in the labor market and the military were seen as a threat by the white working class; and grew more in reaction to the Civil Rights Movement.

These were not just historical monuments of a long-lost cause, but a reminder by some Southern whites that the past was not dead. We should not be surprised then that white nationalists now embrace these statues, supported by neo-Nazis and promoters of the alt-right who swear allegiance to Donald Trump.

Southern California is not immune to this racism. In fact, we have our own sordid history involving the KKK,  racial property discrimination, prejudice and oppression of people of color. Today, there are two prominent alt-right figures in the White House, and they come from Southern California.

Back in the 1920s a large contingent of the Klan, whose headquarters were just west of the current San Pedro Library, marched down 12th Street in their white robes to break up the union hall of the Industrial Workers of the World, or Wobblies as they were called, primarily because they were the first integrated union.

The IWW was the precursor to the ILWU and were the ones who coined the slogan “an injury to one is an injury to all.”  The Wobblies had their heads beat in, were often tarred and feathered and then dumped out in the desert, if not arrested for violating the Criminal Syndicalism Act — a law enacted during WWI to suppress opposition to the Great War.  This law was not revoked until 1967.

Still if you think that the kind of racist rally held in Charlottesville this month couldn’t happen here in the City of Angels, think again. We have plenty of our own home-grown hate groups, although most might deny it openly. Still, they are here in our neighborhoods (79 groups in California alone) and they pop up in our social media and at neighborhood councils.

And then there is our very own naive Los Angeles city councilman, Joe Buscaino, who recently put out the call for his supporters to come and support his objection to changing Columbus Day to Indigenous People’s Day (see Random Letters, p. 9).

Now, I haven’t thought very much about Columbus Day, and for most of my life I probably thought of it like St. Patrick’s Day or Cinco de Mayo — days that we’ve mostly all adopted as being a part of American melting pot.

Yet, on closer inspection, the adoption of Columbus Day unfortunately coincides with timing of the resurgence of Confederate statuary in America.

It was first adopted in 1905 and then made a national holiday in 1937 because of the Knights of Columbus lobbying Congress. As national holidays go, it seems to be an also-ran kind of celebration, since at least six states don’t recognize it.

Yet, this day is celebrated throughout the Americas but with some drastically different interpretations. In Uruguay, Columbus Day is celebrated as Día del Respeto a la Diversidad Cultural (Day of Respect for Cultural Diversity). In Belize, it’s Día de las Américas (Day of the Americas). Other Latin American countries celebrate it as Día de la Raza (Day of the Race).  All of these takes the emphasis off of the man who got lost looking for a western route to India and initiated the enslavement and near genocide of the indigenous peoples of the Caribbean.

I’m sure that Buscaino didn’t learn that piece of history in his American history class at San Pedro High. Yet, he’s calling for us to embrace cultural diversity while embracing Columbus! Kind of like how San Pedro boosters embrace the term but with the aim of bringing more white people to the San Pedro waterfront. Does Columbus not represent the same kind of human repression as Lee’s statue?

Buscaino’s understanding of diversity has a curious twist to it. He makes the case for keeping the day, yet there’s no other national holiday that is dedicated solely to one ethnic group. So perhaps the City Council should rename Columbus Day “Discovery Day” and let Buscaino celebrate Italian Day with Chianti and pasta any time he likes?

We, as people of a free nation, must be ever vigilant in protecting our freedoms against the “Unite the Right” white-nationalists, who as in Charlottesville or any place else  rise up and threaten the freedoms and liberties of our citizens. It is up to this generation to set this right as generations before have struggled against even greater oppression.  And, we must let it be known that there are actions and speech that step too far, that cross the line between one’s right to protest and another’s right to be free from oppression and abuse—a subtlety that the current occupant of the White House doesn’t get.