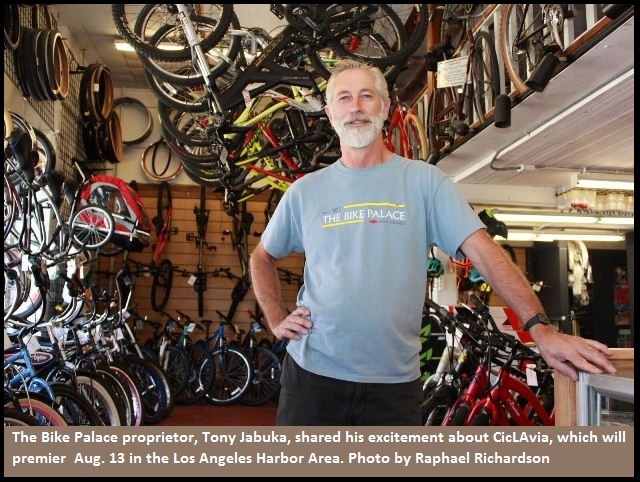 It’s no easy task bicycling between San Pedro and Wilmington. Although the two communities are connected by a bike path on John S. Gibson Boulevard, cyclists contend with ever-present broken glass, traffic and diesel exhaust. The worst part is the unsettling feeling of fully loaded cargo trucks roaring past at high speeds. It is a far cry from the pleasant promise described in waterfront development plans more than a decade ago.

CicLAvia will liberate riders from these hazards — for one day, at least — with its San Pedro Meets Wilmington route Sunday, Aug. 13. CicLAvia is both the name of the event and the nonprofit organization that manages it.

“Many people don’t remember how fun it is to ride a bike,” said Tony Jabuka, owner of The Bike Palace in San Pedro; Jabuka has served bicyclists in San Pedro for more than 35 years. “That’s why CicLAvia is great. It’s a day of fun on your bike.”

During CicLAvia events, cyclists, skaters and walkers can make full use of certain streets; the route is closed to motorized vehicle traffic.

“I love the vibes of CicLAvia,” said Ednita Kelly, a San Pedro librarian and operator of the Book Bike. “You get to meet new people and get to know your community.”

Kelly has participated in several past CicLAvia events around Los Angeles.

“CicLAvia actually inspired the Book Bike,” she said, referring to the adult tricycle she modified to carry books in a forward compartment. Kelly rides it to schools and events like CicLAvia, where she distributes free books, signs people up for library cards and gives general information on the Los Angeles Public Library. CicLAvia Executive Director Romel Pascual said the San Pedro Meets Wilmington event is about showing off those communities to visitors and reminding residents what’s in their own backyard.

“These are great communities and CicLAvia will make them both fun and accessible,” Pascual said. “There will even be pedicabs for seniors.”

The endpoints of the route are Banning Park in Wilmington and the intersection of 22nd Street and Pacific Avenue in San Pedro, but participants can enter and exit wherever they want. Major streets include Avalon Boulevard, John S. Gibson Boulevard, Harbor Boulevard and Pacific Avenue.
The route features four hubs — both end points, Wilmington Waterfront Park and a block near the Port of Los Angeles building in Central San Pedro.

“The hubs have family activities,” Pascual said. “There will be rock climbing, soccer games and food vendors.”

CicLAvia has drawn a variety of reactions from the community.

“It gets people thinking about active transportation … [and] reducing our dependence on fossil fuels,” said Sylvia Arredondo, president of the Wilmington Neighborhood Council and Civic Engagement Coordinator for Communities for a Better Environment. “[But] the route passes by the southern end of the [Phillips 66] refinery.”

Arredondo questions whether that issue will be addressed or if CicLAvia is just going to spotlight the Waterfront.

“The great thing about CicLAvia is that you get people out in front of your stores,” Jabuka said.

“But when it gets to San Pedro, the route turns from Harbor Boulevard onto 5th Street to get to Pacific Avenue.”

Jabuka said that while 5th Street does have quality businesses, it’s not San Pedro’s business center; 6th Street is.

John Jones III, field deputy for Councilman Joe Buscaino, helped organize the route. He explained that 5th Street was selected because it is widest street around. There will also be lane reductions further south along Harbor Boulevard due to construction work.

“There will be way-finding signs to point out the businesses on 6th street,” Jones said. “I have been to CicLAvia before. [Riders] do explore the area while in a different part of town to eat and rest.”

The Downtown San Pedro Business Improvement District will be offering free bus shuttles to parts of Central San Pedro not on the route.

Jabuka and Kelly are excited that CicLAvia will include Pacific Avenue, allowing riders to see several shops and restaurants that San Pedrans take pride in. The end of the route also makes Cabrillo Beach accessible.

“Trucks can be a deterrent to riders near the port,” Kelly said. “People will have the opportunity to get up close and personal with the cranes and other port sites.”

The port is an impressive example of commerce and industry, yet it is also a major source of pollution. There is evidence that CicLAvia benefits communities by reducing local air pollution. As Arredondo mentioned, the more people who are bicycling and walking, the less people that are driving fossil fuel-powered vehicles. A study by the University of California-Los Angeles documented that air particles two-and-a-half micrometers and smaller declined by 49 percent on CicLAvia streets in 2015. These particles can cause cancer and cardiovascular disease as well as impair the nervous system.

“I look forward to seeing the CicLAvia organizers keep those conversations going [with the community],” Arredondo said.

The Aug. 13 ride will be the 22nd CicLAvia event. The organizers select a route based on its ability to improve recreation for communities that are low income and park poor. Wilmington and Central San Pedro obviously qualify, prompting some residents to wonder why their towns haven’t hosted CicLAvia before now.

“It took so long for CicLAvia to get here,” Jabuka said. “San Pedro is like the end of the world in Los Angeles.… Other communities have many great baseball fields, soccer fields, basketball courts, tennis courts…. We need places to play, too. And they need to be free.”
Jones offered his opinion on why CicLAvia has not been to San Pedro before.

“There has never been a culture for such an event down here,” Jones said. “CicLAvia is a fairly new concept to Los Angeles and it’s not an easy sale to the community or businesses. Plus, you need to have the political backing for such an event to help get the city departments and grantors like Metro involved.”

“San Pedro is a hilly town … when you ride down a hill for some groceries, you’re not always going to want to ride back up,” Jabuka said. “Many average riders are discouraged.”

Yet there is a dedicated group of bicyclists in San Pedro. The Peninsula Cycling Club has about 200 members who enjoy road racing, including Jabuka. They do “Lunch Runs” at the Marina on Wednesdays and Fridays; they also ride along the coast and around the Palos Verdes Peninsula.

“There is a bike culture here, but it is not the culture the [council office] wants [to promote],” said Arredondo.

Since 2014, she has worked with a group called C.I.C.L.E (Cyclists Inciting Change through Live Exchange) and occasionally with Jones to put on community bicycle rides and safety workshops; Arredondo even helped put on a class for women to learn how to use a bicycle for self defense.

Buscaino’s office was willing to promote this community, but only in the context of how his office helped the group.

“They wanted to do a promo video with us, but our group decided we didn’t want to participate,” Arredondo said. “We were doing things before his office helped us. [After declining,] our events became harder to promote and wouldn’t get prioritized.”

Pascual offered that CicLAvia has not been to the Los Angeles Harbor before due to another criteria the organizers use to select routes: people from across Los Angeles should be able to use public transit to travel to the event. Prior to 2010, traveling to San Pedro and Wilmington by bus took several hours and often necessitated multiple transfers. However, since the LA Metro Silverline began operating, traveling from Downtown Los Angeles to either community is relatively quick and simple.

More than 16,000 people commute on the Silverline each day during the week. More than 4,000 people ride it on Sunday — the day of CicLAvia.

With encouragement from Buscaino and Mayor Eric Garcetti, Pascual made the case to all of CicLAvia’s partners that the city’s public transit system would allow people to get to the Harbor.

Jabuka stressed that with upcoming waterfront developments, like the Avalon Promenade and San Pedro Public Market, CicLAvia is a unique opportunity for San Pedro and Wilmington to reach out to the rest of Los Angeles.

“There are so many jewels here, and now they will be showcased to [the rest of] Los Angeles,” Jabuka said.

If this CicLAvia is like previous ones, there will be participants from 80 percent of the neighborhoods of Los Angeles.

Kelly added that she hopes visitors will keep tabs on these destinations and projects to visit periodically. She advised locals to welcome visitors.

“Our own residents have to participate if they want events like CicLAvia to come back,” Kelly said. “So when CicLAvia is here, get off of the sidewalks and [o]nto the street!”