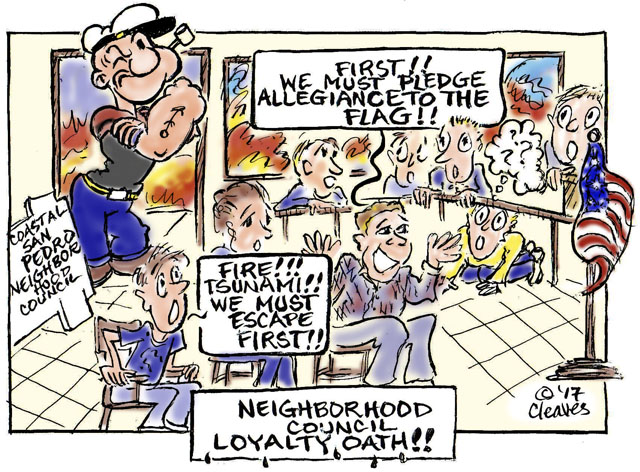 Going Coastal, Using the Pledging Allegiance as a Wedge

Coastal San Pedro Neighborhood Council’s July 10 agenda-setting meeting turned out to be a rowdy affair. Some 20 stakeholders got riled up over the proposed standing rules change that removed the Pledge of Allegiance at the beginning of the meetings and voted against every item proposed until a resolution keeping the Pledge was placed on the agenda for the next meeting. This rule was passed by the previous council and, as it turns out, was not always adhered to.

Yet now, after the former council members are no long serving, they are insistent that the pledge be retained.

The opposition, led by George Palaziol and Brian Vassallo with Bob Milling — all former Coastal board members, including former council President James Baeza, who resigned while under pressure from the Department of Neighborhood Empowerment, joined in to stop the newly elected council from taking any substantive actions. They claimed the new council was acting illegally.

The agenda setting meeting ended leaving board members with the dilemma of how to run the next board meeting without being able to elect officers. This was their first after the June election.

After consulting with the DONE General Manager Grayce Liu and a lawyer, it was decided that Liu would convene the board meeting and conduct the election as per their bylaws. But first there was the Pledge of Allegiance which the opposition boisterously shouted out as both a challenge and a protest to the coming action by the board.

Doug Epperhart was unanimously elected to be president and Dean Pentcheff as vice president by the same vote. The meeting then proceeded to public comments. The only caveat was that the new leadership was not going to stand for mob rule and was going to enforce the California Code 403, which makes disrupting a public meeting without authority illegal. Three Los Angeles Police Department officers and two Los Angeles Port Police officers were on hand.

With this admonishment announced, Palaziol shouted something out and was warned. Others chimed in to protest the proceeding, claiming it “illegal” and two or three from the Saving San Pedro faction were dutifully ousted from the meeting with the help of the officers.

This did not end the grousing, yet the board did get to business and passed several of the agenda items with complete unanimity, unlike the previous council.

Bob Milling afterwards wrote in a Facebook post he was “So profoundly disappointed in a number of people I had a great deal of respect for just this time last month.”

He was one of those evicted from the meeting.

It was at the point of being forcibly removed from the meeting that one of the opposition came to me asking why “I wasn’t going to defend their free speech” This seemed quite odd since these were the very same people who came to the meetings at Central San Pedro Neighborhood Council two years ago and disrupted meetings I presided over, claiming I was acting illegally. They also said I should be removed without cause and did everything in their power to intimidate, slander and cyberbully my board.

To this point specifically, I say there is some speech that is not defendable!  And boisterously disrupting a public meeting in an uncivil manner, unless there is some overriding moral issue at stake, I will not defend.

Of the many issues that confront this community, reciting the Pledge of Allegiance before the start of a neighborhood council meeting as a standing rule is by all accounts a divisive distraction.

One female veteran attending the meeting noted that service men and women don’t usually find themselves reciting the Pledge of Allegiance when they are on active duty. This assessment was confirmed to me by another veteran and said that the oath all military and other federal officers recite is similar to the following:

I, _____, having been appointed an officer in the Army of the United States, as indicated above in the grade of _____ do solemnly swear (or affirm) that I will support and defend the Constitution of the United States against all enemies, foreign and domestic, that I will bear true faith and allegiance to the same; that I take this obligation freely, without any mental reservations or purpose of evasion; and that I will well and faithfully discharge the duties of the office upon which I am about to enter; So help me God.” (DA Form 71, 1 August 1959, for officers.)

It might help those who, as Council President Epperhart says, “are using the pledge as a wedge,” to remember that veterans served to defend the U.S. Constitution — not the flag.

In the end, it was apparent that the Saving San Pedro faction, who rose up against the homeless, was incapable of governing after having only lasted a year in power on the Coastal San Pedro Neighborhood Council.

“I can’t account for their behavior,” Epperhart concluded.  Is their aim “to tear down government or just cyberbully? I don’t know. Perhaps they just need peer recognition?”

At the very end of a very long meeting, the motion over the Pledge of Allegiance was taken up as a separate item and discussed exhaustively and passionately. And when the vote was tallied the pledge was retained with a divided vote of 8 to 6 showing that our nation, if not our community, is very “divisible” if not over liberty and justice, but over the symbolism of patriotism.