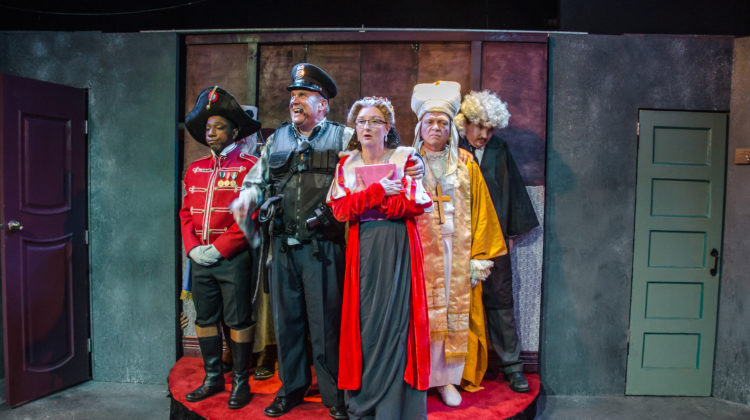 About halfway through opening night of the Garage Theatre’s production of The Balcony, I was put in mind of a bit I particularly like from Being and Nothingness, Jean-Paul Sartre’s 1943 philosophical magnum opus. Sartre asks us imagine a waiter at a café, to examine his particular little movements and expressions as he takes orders and brings food. It’s like he’s playing a sort of game. But what is he playing at? The game of being a waiter. He’s not essentially a waiter: he’s performing the ritual of waiter in order to manifest the condition in the world—an example that holds for the entire façade of society:

[T]he waiter in the café plays with his condition in order to realize it. The obligation is not different from that which is imposed on all tradesmen. Their condition is wholly one of ceremony. The public demands of them that they realize it as a ceremony; there is a dance of the grocer, of the tailor, of the auctioneer, by which they endeavor to persuade their clientele that they are nothing but a grocer, an auctioneer, a tailor. Society demands that he limit himself to his function as a grocer […]. There are indeed many precautions to imprison a man in what he is, as if we lived in perpetual fear that he might escape from it, that he might break away and suddenly elude his condition.

Considering Sartre’s influence—particularly in France—this passage was probably somewhere in Jean Genet’s mind when, 13 years later, he penned his classic about role-playing and reflection writ large. In The Balcony, we’re all whores as soon as we get the dumb idea to play out our private fantasies on the public stage. But it’s an idea with which Genet has a bit of absurdist fun, spawning the kind of work that might have come locking Sartre and Groucho Marx in a room together with a bottle of absinthe and not letting them out until they wrote a play. It’s simultaneously smart, pretentious, silly, and astute.

Welcome to the Grand Balcony, an inconceivably elaborate brothel run by Madam Irma (Sherry Denton-Noonan) in an unnamed city where a revolution is raging. Here you can play out your wildest fantasies—which, apparently, have a lot more to do with power than sexual relations. Here we meet the Bishop (Christopher Spencer), the Judge (Adam Brooks), and the General (Bruce Eason), men who revel in playing at hearing confessions, at being begged for absolution and mercy, at ordering their fellow citizens to their deaths and being lionized for such lordship. It would be a safe environment, were it not for that pesky revolution, with all the bodies in the street and threats to the established order. The Chief of Police (Chris Mock)—who actually is the Chief of Police—doesn’t especially mind, so long as in the end someone inside the brothel will play at being the Chief of Police. Besides, inside or outside, for the rebels and the powers-that-be, it’s all the same:

THE CHIEF OF POLICE. The rebellion is a game. From here you can’t see anything of the outside, but every rebel is playing a game. And he loves his game.

IRMA. But supposing they let themselves be carried beyond the game? I mean, if they get so involved in it that they destroy and replace everything. Yes, yes, I know, there’s always the false detail that reminds them that at a certain moment, at a certain point in the drama, they have to stop, and even withdraw…But what if they’re so carried away by passion that they no longer recognize anything and leap, without realizing it, into…

THE CHIEF OF POLICE. You mean into reality? What of it? Let them try. I do as they do, I penetrate right into the reality that the game offers us […].

Genet can be tedious, but director Jamie Sweet makes two choices that help keep that tedium from becoming too thick: he gives us two intermissions (with which this version of The Balcony runs three hours), and he emphasizes the silly. The result is a third act that redeems your choice to have sat through the first two, because here is where you find most of the fun. Three cast members in particular help on this front. Elijah Douglas, who plays the Queen’s Envoy and has little to do in the first two acts, delivers his lines with a quirky stateliness that helps steer The Balcony into more amusing waters. Meanwhile, the drunker the Judge gets in the face of his new real-world responsibility, the more slapstick—and funnier—Adam Brooks is. But Christopher Spencer may be the brightest light. He is so fab in Act 1 that we really feel his absence from the middle of the play, but he’s back with a comic vengeance in the final act. Some actors are just a joy to watch at every moment; Spencer is that kind of talent.

The rest of the cast is generally fine, but as of opening night Sherry Denton-Noonan was not yet off-book. This is, you know, less than ideal for any role, but it doubly hurts the overall flow here, since Irma has more lines than anyone else.

The Garage Theatre is a low-budget outfit, but within those constraints the mise-en-scène works well enough to bring the Grand Balcony to life. In particular, Cat Elrod’s costumery is cute. Despite being a play whose action takes place almost the entirety within a single space, The Balcony is a rather ambitious show to do in a black-box theatre, and I give the Garage an A- for effort (the minus because I think going a shinier route would have made the production more visually interesting).

“Do you really think we will be satisfied with make-believe until the end of our days?” the Bishop asks as The Balcony winds to its inevitable conclusion. Genet’s answer seems to be that we would be better off if only we could confine our power roles to the bedroom, rather than needing to play them out in the world at large—but the genie is out of the bottle. “We waited 2,000 years to perfect our roles. […] There will never be a rebellion powerful enough to destroy this imagery.”

We can, however, acknowledge our predicament, and laugh at it. Then maybe, just maybe, we can whore ourselves out to society with a little more decency and dignity than we might do otherwise. And in a world with all this fighting in the streets, a little such self-awareness in the whorehouses of power might go a long way.