MACBETH @ Shakespeare by the S... 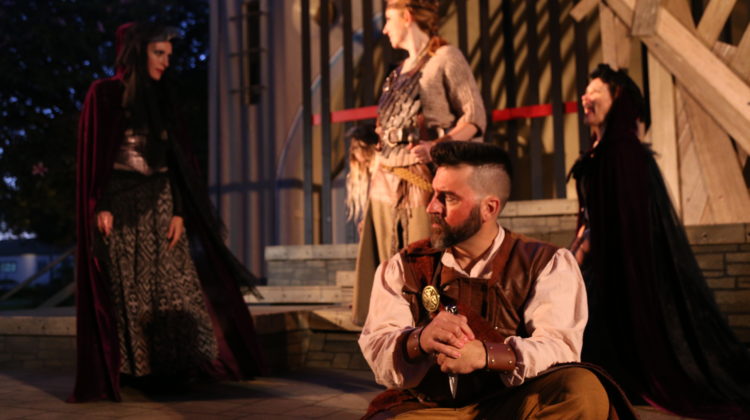 MACBETH @ Shakespeare by the Sea

There’s no denying that Macbeth is a tour de force of a treatise on ambition (one of the Bard’s strongest subjects), and it has more than its fair share of brilliant lines. But despite its reputation, “the Scottish play” may be the most flawed of Shakespeare’s serious (as opposed to trivial) work. “Double, double, toil and trouble”—the whole scene—makes me snicker, the “none of woman born” riddle is eye-rollingly bad, and there are more plot holes than usual for Shakespeare (which is saying something for a guy who never lets a little thing like plausibility get in his way). So much bad writing mixed in with all that the genius has always left me cold.

But Shakespeare by the Sea’s current production is where I turned a corner on Macbeth. It’ll never be Hamlet, but by trimming the fat, making some nontraditional choices, and incorporating a prominent aural complement, director Stephanie Coltrin and her team have created a Macbeth that is just about as engaging for a contemporary audience as a traditionalist, low-budget take can be. And since they sacrifice none of the essence that is worthy of the Macbeth hype, I’ve come out the other side no longer quite the hater.

Shakespeare by the Sea makes some great choices right out of the gate. After a standard Three Witches opening scene, the entrance of the king and his soldiers from behind the audience is bracing. Then comes the first of many scenes in which the piped-in audio (played through speakers posted along a perimeter of the large primary seating area and well mixed by sound tech Briana Billups) earns its keep. Shakespeare’s exposition can be tedious even when it’s necessary, but all such scenes in this show are underscored by acoustical accoutrements that help the jibber-jabber sail by more smoothly. We get the gist of what’s being said, but we’re freed from focusing on the stiltedness of the wording. The music and audio is fairly generic, but it does the job.

Then comes a display of just how carefully Coltrin and cast have thought through their interpretation of the lines that really matter. One of Macbeth’s weakest elements when viewed through a contemporary frame is the Three Witches. Elizabethans were a lot more superstitious than we are, so supernatural hokum played a lot better back then—and Macbeth is full of it. So it’s refreshing to watch Macbeth (Patrick Vest) and Banquo (Olivia Schluter-Corey) regard the “weird sisters” as, well, weirdoes, objects more of ridicule than fear, with Banquo pretty much rolling her eyes at them. Obviously Macbeth and Banquo are a bit awed when their first prognostication immediately comes to pass, but their initial skepticism sets the stage for a production that smartly plays down the supernatural stuff as much as possible, including entirely cutting the worst and most needless such scene.

It’s this instinct that leads Vest to play “Is this a dagger I see before me?” less as a literal hallucination and more as a symbol of Macbeth’s will to power bubbling up from his subconscious. Overall, Vest is good, but he excels on two fronts. The first is how well he succeeds early on in making Macbeth seem likable. While Lady Macbeth’s wickedness was in place long before the play opens (it was always in her nature, and she merely jumps at this opportunity to actualize it), Macbeth is basically a good guy before the Three Witches ignite his fiery ambition.

Vest’s very best moments, though, are with Lady Macbeth (Melissa Booey). Vest and Booey are younger than your typical Macbeths, and they intentionally infuse their characters with youthful passion. When Macbeth has doubts about following through on the first of the many murders he must commit in order to ascend the throne, the intensity Vest and Booey bring to the ensuing argument is electric. Booey is fantastic at being villainous, and when Macbeth comes back only half finished with the bloody daggers, her sheer annoyance at his loss of nerve. “Why did you bring these daggers from the place?” she snaps at his near-bungling of the deadly deed. “They must lie there: go carry them, and smear / The sleepy grooms with blood. […] Infirm of purpose! Give me the daggers [and I’ll do it].” Evil may not be simple, but it’s to Shakespeare’s eternal credit that he created characters who are simply and inexplicably evil (e.g., Othello‘s Iago, Titus Andronicus‘s Aaron), because in real life some people’s bad behavior seems to defy rational explanation. Lady Macbeth is such a character, and Booey embodies her in all of her unapologetically wicked glory.

The supporting cast is solid all around. I’ve already mentioned Schluter-Corey, who is so enjoyable that (***SPOILER ALERT***) you can’t help but be disappointed in the knowledge that Banquo will die before intermission. B.J. Allman steals a scene as Macduff when he learns of his children’s murder, generating grief that is perfectly modulated yet palpable all the way out in the cheap seats. Similarly, Ethan Haslam impresses as Malcolm in his absolute-power-corrupts-absolutely self-reflection. And Andy Kallok’s turn as a sot annoyed at being woken with all that knocking helps make clear just how good Shakespeare can be with comic relief. It’s a scene that may seem like a throwaway, but in actuality it’s central to the play’s overall pacing, and it comes off perfectly.

While I’m content with the acting in context, it’s devilishly hard to achieve what, for example, Ralph Finnes and his cast do in his film version of Coriolanus, which is to make all that overly mannered dialog—fairly unnatural even to Elizabethan ears, downright archaic to us—sound like actual people actually talking. But Shakespeare by the Sea has beaten a good alternative path, shining when it matters most but employing the aforementioned piped-in audio as a means to lighten the load when the lines are less than gripping.

This is, however, an element with which some purists will take issue, as they will with the stage combat, probably the production’s weakest element (although they certainly didn’t skimp on weapon quality). Some may also chafe at the cuts to the original script, but to me they’ve made for an improvement. I’d happily sit through four-and-a-half hours of Hamlet uncut (providing it’s a great production), but bringing Macbeth in at exactly two hours (including intermission!) feels exactly right.

But even purists should enjoy the period-faithful costumery (kudos to Allison Dillard), as well as the incorporation of nature. There is true delight in seeing a play that makes prominent use of heath and forest staged amidst a canopy of real trees, and Coltrin has blocked this show—particularly all those big entrances and exists—outstandingly.

I’ve gone into a lot of detail about this production, but let’s bottom-line it: I didn’t much like Macbeth and had never seen a version I fully enjoyed, but I dug this one so much that I have a better appreciation of the play itself. Macbeth is not Shakespeare at his overall best, but for many this production may be just about as good as Macbeth gets.