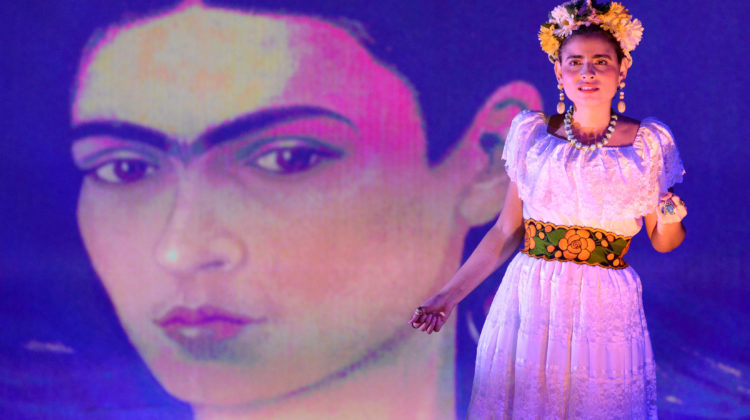 When basing a work of art on historical figures or events, you should ask yourself: Would this be interesting if it were pure fiction? This must be an old adage, but it’s not popular enough, because too often such works seem to lean on the crutch of audience familiarity, as if the fact that we know/care about real-life such-and-such means the artist is halfway home before putting pen to paper or note to staff.

Too often they’re right. You would not believe how many times I hear audience members make clearly audible sounds of appreciation (“Mmm”) at any reference they recognize. Stick a bunch of pop-culture references in a comedy, and no matter how bad your jokes are, half the audience is automatically rolling in the aisles.

Without making any statement about her merits as a painter, Frida Kahlo is a pop icon. Everyone’s heard of her, and a lot of people love her and those well-deep eyes staring out beneath the world’s most famous unibrow. That fact alone means many people who otherwise would never go to the opera will come out for Robert Xavier Rodríguez’s Frida, and many who’d have no taste for it were it pure fiction will eat it up. I’m sorry to say that those are the only people to whom I can recommend this curiously conceived and poorly-fleshed-out work.

We meet Frida (Laura Virella, who definitely looks the part) as a rather leftist prep-school student (they study Marx) just as the Mexican Revolution is coming to an end. They look forward to being a generation that will realize the promise of a people whose country that has suffocated the proletariat for so long. A couple of years later Frida’s own promise nearly meets a premature end, as she narrowly survives a horrific bus accident. She is damaged for life, but a new artistry is born as she lay convalescing, painting the first of those now-famous self-portraits. “I was full of life dancing in a world full of color,” she sings. “[…] I’m old in an instant. […] Death dances around my bed at night, but I refuse to die. […] I’ll create the Frida I want to be.”

The second half of Act II is so centered on Diego Rivera (Bernardo Bermudez) that you start to wonder who this is really about. Diego has a falling out with the communists. Diego wants to move to America. Diego is the toast of New York. Diego gets a commission from Rockefeller. When Frida opens her mouth, it’s Diego, Diego, Diego. By the time she has a miscarriage just before intermission, she’s become as a supporting character in her own story.

To be fair, in real-life she was pretty damn into Diego back then, and he was definitely a big deal, so okay. Plus, Frida’s back at the center of things in Act II. Unfortunately, the plot here is so thin that if I tell you that Frida has a hard time with Diego’s philandering, Frida start philandering on her own, Frida paints, and Frida’s health deteriorates, I’ve given everything away but Trotsky. And while such a dearth of plot points is not necessarily a death sentence, Rodríguez and co-writers Hilary Blecher (book) and Migdalia Cruz (lyrics/monologues) committed a far less venial sin: they skimp on depth. Emotional exchanges between characters are expressed at a telenovela level, while expositional monologs (a lot in Frida is spoken rather than sung) are often so unadorned that it feels like this is workshop narrative holding the place for the eventual finished lines. A full scene of monolog that is Frida talking to her photographer lover (not even a character in the opera) adds nothing to the plot and brings the proceedings—which were weak on momentum, anyway—to an awkward halt. This exemplifies how most of Frida—and almost everything after the bus crash—simply skims the surface of Kahlo’s life, landing momentarily on a well-known plot point, then skipping on to the next.

All might be forgiven were Frida musically compelling, but I really don’t know what Rodríguez is trying to accomplish. His hodgepodge technique of drawing upon the Gershwin-esque, vaudeville (!), and a host of incongruent elements in unsatisfying short bursts (way too frequently concluded with a cymbal choke) left me cold and left no-one with a single melodic memory we could carry away with us. Just as puzzling is why Mexico is not more present in the score. Considering how fiercely Mexican Frida Kahlo was and how much of Frida takes place in Mexico, the statelessness of the music makes me wonder whether Rodríguez tried too hard play against perceived expectations of a Mexican-American composer writing about a Mexican woman.

Because Rodríguez’s style here is so momentum-averse, Frida‘s best musical moments never last long. There probably aren’t four songs—good or bad—that go three minutes without a drastic shift—and often such shifts come every 10 or 20 seconds. I was hoping the lovely flugelhorn-themed, marimba-backed opener of Act II would develop into an aria. Nope. I also would have loved more of the Greek chorus of Calaveras (Alejandra Martinez, Joanna Ceja, Jonathan Lacayo, and David Castillo, all of whom also play several other roles). They first appear during Frida’s bus crash, jumping in with a whiny warble of high-pitched monotone (a distinctly Mexican style of singing for which obviously I lack the proper term) that, along with a dramatic shift to red lighting, immediately transports us to another headspace. It’s an inspired move, but Rodríguez gives them only 15 seconds here and comes back to them maybe three more times in the entire opera (and only once at length). It was interesting and effective every time, and every time it put me in mind of the opera I wish Rodríguez had written.

Because Rodríguez gives his soloists so few opportunities to stretch their vocal legs, it’s hard to judge their performances. Clearly Virella is a solid mezzo-soprano, Bermudez’s baritone always rings out clear and true, and they are always within their comfort zones; we just never get to hear them explore or expose themselves at length, nor do we get to hear much interesting back-and-forth between them. The closest we get are a couple of all-cast numbers, but because of Rodríguez’s hodgepodge style, what is most compelling sonically is how the physical separation of the voices create auditory horizontal breadth.

Frida Kahlo is not going to lack for fans anytime soon. But considering that Frida gives us less insight into her life—and her soul, I’m afraid—than does her Wikipedia article, with as little as the music gives audience’s to hold on to, I doubt she’ll garner any new ones from the opera bearing her name. But if you’re already a fan, hey, it’s fun to see history brought to life, right?