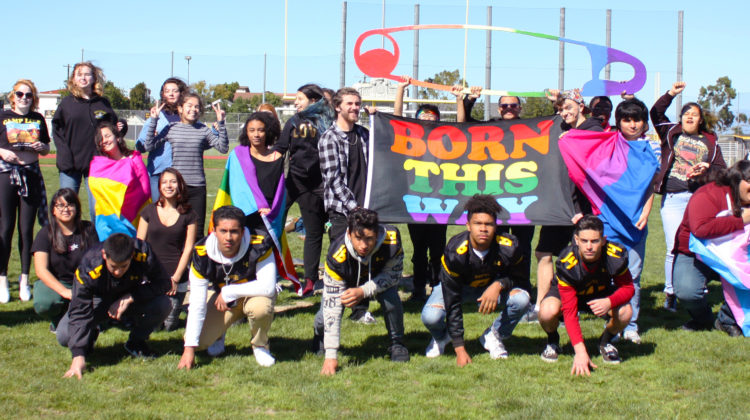 Public High School Art for the Scapegoats of Humanity

Activist-historian Howard Zinn, author of A People’s History of the United States, famously said, “You can’t stay neutral on a moving train.”

As we move into the new administration’s crackdown on immigrants and its determined rollback of Barack Obama administration policies — particularly those protecting transgender, lesbian and gay communities — two San Pedro High School teachers have chosen to use art to help students create a safe, yet committed, environment to resist and express solidarity with disenfranchised communities. English teacher David Crowley and photography teacher Amy Dean have teamed up to spearhead the political art project Crowley has dubbed Safety Pinups. The project is a series of student-taken political photographs that show support for San Pedro High School students who are targeted by the Donald Trump administration. It promotes solidarity and understanding between different groups within the school.

Crowley, who conceived this San Pedro High School-based project, was inspired by the World War II Safety Pin Movement in the Netherlands, when Adolf Hitler was persecuting Jews, the gay community and even the disabled. Crowley explained that women would wear safety pins on the hem of their skirts and men would wear them under their collar, symbolizing, “you’re safe with us.”

“When Trump was elected this movement started to reappear and people started to wear safety pins again,” Crowley explained. “When I was reading about this, I was like, ‘Well, my GSA (Gay-Straight Alliance) kids are going to be hurt under this new administration,’ and they were scared,” Crowley said. “What could we do? So I taught the kids about the Safety Pin Movement and I was like ‘Hey, we could wear pins.’ So that’s what I had them do.”

Crowley has been the faculty sponsor for the high school’s Gay-Straight Alliance since its founding 16 years ago. Since Trump took office, schools throughout Los Angeles conducted walkouts in protest of Trump’s policies and marching to downtown. San Pedro High School students wanted to do the same, but the distance between the Harbor Area and downtown Los Angeles made a march a difficult proposition. To bridge the gap, Crowley thought of another way for students to make their opinions known.

“I’ve always been a big fan of art as protest and I figured we could find a way to keep the kids in school, which is important, but still give them a way to express themselves. I was sitting there thinking of the words ‘safety pins’ and suddenly it came to me: ‘Safety Pin Ups!’ You remember those old pin ups from World War II that soldiers would put up in their lockers and stuff? They’d have Betty Grable and all those pin up girls. I was like, ‘Well, a pin up doesn’t just have to be a beautiful woman, it doesn’t have to be a centerfold, as it were; it could be art, specifically photos, that you just pin up.”

Crowley pitched the idea to Dean, requesting that she collaborate by having her class take these proposed “Safety Pin Ups.” Dean loved the idea.

“It’s really a way for the students to express themselves in a creative way and show support to our students who may feel they are in a compromising position in our current political climate,” said Dean. “They’re collaborating to promote a safe campus, striving for the acceptance of differences … so really a way kids can learn to show solidarity towards each other.” Dean began her photography lessons by showing how different photographers,  historically, have staked out political positions in their work. Dean cited Dorothea Lange’s work featuring the internment of Japanese Americans as an example for her class to parallel  photography in connection to Trump’s immigration policies. She explained the approach as “comparing what other people have done in the past and how they [the students] can make an effect.”

Dean’s class has since taken the initiative by shooting their own concept photos in addition to those suggested by other students. Dean said the student reaction has been mostly positive. Crowley agreed, pointing out the participation of many unlikely students as well as several of the high school’s star baseball and football players.

Members of the Gay-Straight Alliance [known to its members as Pride Club] have been active participants as the subjects of many of the photo shoots done by Dean’s class. Erin Hoback, a photography student and an ally (a heterosexual person who advocates for LGBTQ rights) talked about the photo she took for the project. Her photo depicted students holding hands, their hands painted to resemble the Gay Pride flag.

“I knew I wanted to show unity through hands and the colors of the gay pride flag,” said Hoback.

“I honestly thought this photo wouldn’t work because it would get messy, but with the help of Ms. Dean and the students that painted their hands for the picture the photo came to life and turned out exactly how I wanted…. I was happy to know that the Pride Club wanted to be involved in making the school a better place for those who feel marginalized due to the election or just disrespect[ed] from peers who don’t understand being different is OK.” While some of San Pedro High School’s students still aren’t very accepting of those with sexual differences, Crowley believes the school has come a long way in the 16 years he’s been there, mainly through the GSA’s efforts. “[But] we still have a long way to go,” Crowley said.

The Safety Pin Up movement is by no means solely focused on LGBTQ issues. Students have put heavy emphasis on immigration issues as well.

As a majority Latino school, there are a significant number of undocumented students and many more with undocumented family members. As such, many members of the student body are very concerned about how their futures may be affected by Trump’s promise to increase deportations.

Crowley and Dean have both noticed the effect these new policies are having on many of their students.

“I’m seeing a lot of anxiety right now,” Dean remarked. “There’s a lot of uncertainty. At home, I’m sure their parents have a lot of anxiety and I see the kids bring that anxiety to school…. Sending your kid to school shouldn’t have to cause you anxiety.”

“I think them putting their faces on (the pin ups) is a very courageous act,” said Crowley. “Some haven’t, some have wanted to participate and we’re figuring out ways for them to do that, because there’s definite fear out there and it’s horrible, horrible when you’re worried about your family being torn apart…. I don’t care if you’re here legally or not, if your parents brought you over here, I’m sorry, you have a right to an education.”

Dean pointed out that the school has been doing its best to help make families feel safe.

“We have our counselors here that are willing to talk to parents that might have concerns about their status and I think the school has let it be known that you can send your kids to school, you don’t have to worry,” Dean said. “Although, how can you tell somebody that they don’t have to worry with the climate the way it is?”

With its  rousing success at San Pedro High School, Crowley would like the movement to expand to other schools and perhaps spread nationwide.

“The idea is for the movement to take on a life of its own,” Crowley said.  “I have very high hopes for this. My ultimate goal would be for it to go from social media to a gallery. Having a gallery show here in LA and in New York and in Chicago and maybe other places throughout the country and maybe even have it move around so we have kids sending in their art from all over the country.”

For now though, the safety pin ups are posted in the main office of San Pedro High School and are being uploaded onto Facebook through the page Safety Pin-Ups.

Crowley alluded to Adorno’s famous statement that “all art is an uncommitted crime.”

“Art challenges the status quo by its very nature,” he continued. “So, if this is the new status quo, if the Trump administration and those who support them are going to be the new normal, then we need to challenge the status quo, right? And to me, all art is political. It’s in a public space. It socially engages people …while people come to it with their ideologies already in place, it can change those ideologies.”