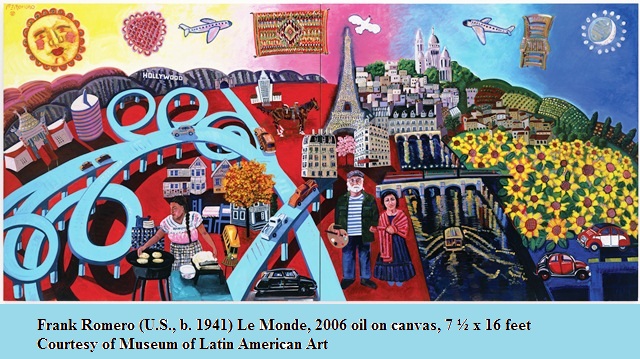 The year was 1974. Newspaper heiress Patty Hearst had been kidnapped by the Symbionese Liberation Army, White House officials were indicted for their role in the Watergate scandal and a black man, Hank Aaron broke Babe Ruth’s home run record. It was also the year that Chicano art was introduced to the world in an exhibition called Los Four at the University of California Irvine Art Gallery.

This month the Museum of Latin American Art presents a retrospective of the work of one of the original Los Four founders, Frank Romero, in the exhibition entitled, Dreamland.

An extended video interview with Frank Romero is available at Palacio Magazine.

Romero’s most iconic works, including his mural work, such as Driving to the Olympics featured on the Hollywood Freeway, address life in the barrios of Los Angeles. Romero and his fellow artists grew up in Boyle Heights, a place that informed much of their cultural experiences during the turbulent ‘60s and ‘70s. Car culture, Mayan and Mexican mythology, tension and violence in inner city Los Angeles all make up the highly autobiographical work of Frank Romero. “Over time, some of his images, pingos, decorated or flaming hearts, chairs and cars have become his personal icons and symbols. They are simultaneously symbols of the Chicano environment in which he grew up.”

MOLAA has completely filled the museum’s walls with the collection of 200 works of art, assembled from almost 50 lenders. Major museums across the country and private collectors sent a historical collection of the glimmering fantastical works. His bold and joyful images reflect the conflicts, as well as the pride, of Chicano life.

After 20 years, the museum opened its arms and its galleries to fully embrace the work of Chicano artists. It required a change in the mission statement to break down the barrier that prevented exhibition of the art form. Former Director Stuart Ashman returned from Santa Fe, New Mexico to join in an exuberant celebration of artists, community sponsors and low-riders to celebrate the historic evening. The exhibit was unveiled following a passionate speech by Cástulo de La Rocha, president and CEO of AltaMed Health Services, collector of Chicano art and a major funder of Dreamland.

The shift in the direction of the museum was triggered by a chance elevator ride, shared by actor and Chicano art collector Cheech Marin and Ashman. Marin raised the question: Why have Chicano artists been shut out of the museum that is meant to represent their heritage?

“I am very proud to be the first solo Chicano artist to exhibit at MOLAA,” Romero said . “It is something that I have worked many years to see happen. And of course, I’m kind of shocked that they got my favorite artist, me! Cheech and I campaigned to change the mission. It was a gradual process but I am happy to be part of it.”

Curator Edward Hayes explains that there is some serendipity in the timing of the exhibition.

“Two-thousand-seventeen turns out to be the year of Los Four,” he said, referring to the Chicano artist collective of the 1970s and early ‘80s. “MOLAA is the first out-of-the- gate this year, organizing the Frank Romero retrospective, then [the Los Angeles County Museum of Art] opens a Carlos Almaraz show, followed by UC Irvine with Gilberto Lujan. Roberto de la Rocha is also acknowledged in a film here at MOLAA.”

“I grew up in East LA,” Suarez said. “Frank Romero’s work is reflective of the struggles that the community goes through ….  Any brown community in the LA area can connect to those paintings and the struggles they depict. At the same time, he has some really vibrant work that reminds us of how vibrant life is. Romero is a good example of not staying static as an artist. That is a really important lesson for young artists, that you continue to find that creativity within you.”

Forty years after the explosion of Chicano art, there is a question as to the continuing relevance of its message. A culture of narcissism overtook the work of many artists in the ‘70s and ‘80s. Many younger artists rejected the idea of a Chicano Movement. At the same time, younger artists have been criticized for a lack of political views.

Writer, historian and director of the film Dark Progressivism, Rodrigo Ribera d’Ebre, has noted the changes that have taken place in the new generation of artists.

“The Chicano movement was very specific” he noted. “It was mostly Mexican-American, male dominated with a political agenda. It dealt with border issues; it dealt with labor, race ideology and identity. Most of the young artists today do not necessarily identify as Chicano artists, but they will all say that they were influenced by it. The platform that artists have today speaks to the national dialogue, it doesn’t necessarily speak to a demographic.” Now, with the emergence of Black Lives Matter and the radical right wing occupying all branches of government, artists are quickly responding to the political atmosphere. Romero’s  works,  Police Violence: The Arrest of the Palateros, The Death of Ruben Salazar and The Closing of Whittier Boulevard, brought national attention to him and to the topic of violence by the Los Angeles Police Department and the Los Angeles Sheriff’s Department.

Romero has considered revisiting the topic.

“Yes, I have been thinking about a new painting,”  Romero said. “It will be about a young black man who was killed in Ferguson, with 15 bullets in him. The Arrest of the Palateros  (ice cream vendors) is very current. In the LA City Council, they are still arguing about licensing for street vendors. This has been going on for 20 years. The inequity of who can sell and who can be licensed still needs to be addressed.”

As Suarez pointed out, Romero is the example of an artist who continues to find  creativity within himself.

Dreamland is on exhibit at the Museum of Latin American Art, and runs through May 21. Visit the museum website for collateral programming and activities celebrating this historic exhibition.