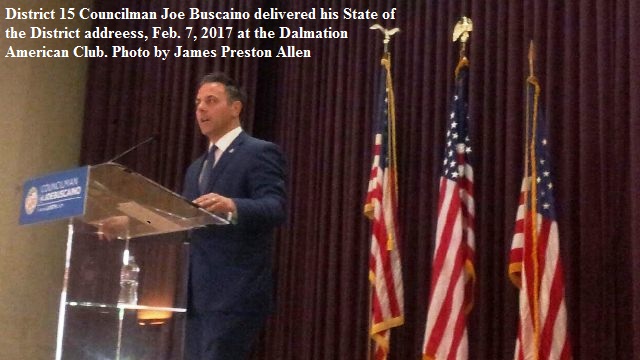 Most of you have been distracted by the Tweeter-in-Chief’s misdeeds in office during his first weeks playing in the Oval Office. But you should realize that his antics are a lot like using a feather toy to distract a cat. The real threat to our democracy seems to be going on down the street in the U.S. Congress with the Republicans noodling with Medicare, Social Security and the Affordable Care Act.

Meanwhile, back in Los Angeles—the capital of the Sanctuary Cities and where city leaders have vowed to stand against No. 45’s bullying and unconstitutional executive orders—there’s something more going on.  The city is about to hold its off-season municipal elections and voters have just received their sample ballot pamphlets. But is anyone paying attention?

There are two on my ballot that need no endorsement since they are running unopposed: City Attorney Mike Feuer and City Controller Ron Galperin. Both have done superb jobs. Feuer for suing Wells Fargo and winning, and Galperin for giving the citizens access to the city’s database with his control panel. Even though they don’t need your vote, vote for them anyway.

What you won’t see on this ballot is the simmering discontent with the Los Angeles City Council that is bubbling up from the ground like tar at the La Brea Tar Pits.  Pay-to-play development zoning, lack of leadership on the homeless crisis and lack of affordable housing are covered up with a blanket of hypocrisy.

This is best exemplified in District 15 Councilman Joe Buscaino’s  attempt to show that he has compassion for the homeless by reporting via his weekly political e-newsletter and his campaign mailer about his ride on the bus that transports our San Pedro neighbors without homes to the winter shelter in Long Beach.

He does not explain why Los Angeles doesn’t have a winter shelter anywhere in Council District 15, nor does he address the illegal stepped-up enforcement actions and continued criminalization of the people camping within a stone’s throw of his office on 7th and Beacon streets. This is the urban encampment that Bob Nizich, the lawyer who has an office on the third floor of the San Pedro Post Office building, has been documenting for months — most recently with a 2017 calendar that he has printed with a picture of San Pedro’s City Hall on the cover.

“The view from the third floor overlooking 8th Street indicates a clean street free of debris and tents,” Nizich complained recently. “The view from the fifth floor at 7th Street (if one bothered to look) would indicate a street full of debris and trash. Hard to believe you could go to work for the last week… and not see it.” The debris he is referring to are the belongings of people who are chased around, harassed and often arrested by the Los Angeles Police Department for the crime of being without shelter.

It has been reported to me from more than one source that the current police tactic is to issue tickets for minor infractions like smoking in the park or obstructing the sidewalk at places where people are camped out. It is when those tickets go to warrant, that the ticketed are caught in catch-22.

On the one hand, if a ticket is allowed to go to warrant, the ticketed are liable to get arrested and their belongings “confiscated” if not left abandoned for city-hired contractors to pick up and dispose.

If they trek over the bridges separating San Pedro from the Long Beach court to satisfy orders to appear, they are likely to find that their cases are not even on the docket for the day they were ordered to appear, wasting precious resources while still running the risk of their tickets going to warrant.

This is the current game that is being played with the councilman’s approval. Remember, he is a former cop and Captain Oreb is his hand picked successor at Harbor Division. This tactic is easily implemented since the 72-hour clean-up notification rule was reduced to 24-hours  in Los Angeles municipal ordinance 56.11.  The council office uses this tactic without even offering the ticketed individuals the benefits of the contentious Navigation Center they were pushing back in September 2016. Remember the Barton Hill uprising? The city’s ordinance can’t be legally enforced without this option, yet it is.

This is all complicated more by the  accusation by Mayor Eric Garcetti and a couple of the city’s power centers, the Los Angeles Times and most of the City Council, that Measure S will stop in its tracks construction that would address the affordable housing and homeless crisis in this city.

Garcetti was quoted as saying that Measure S, “will cause major job loss, will cost taxpayers millions and make our housing and homelessness crisis even worse.”

Yet Measure S specifically carves out exceptions in the two-year moratorium for the building of affordable and homeless housing.  It does put a hold on the gentrification of and the rezoning of properties for the expressed purpose of oversized developments that are negotiated in the back rooms of city hall.  Buscaino is among the 11 city council members endorsing the “No On Measure S” campaign. All of these council members have taken campaign money from developers and have not come up with a right now solution for sheltering the homeless this winter.

This is just one more reason not to vote for Joe Buscaino. But there are few more reasons:

You’ve seen the sign in my window — Joe Must Go!

Vote yes on Measure S.  Vote for Caney Arnold or Noel Gould for city council. Either would be better than Buscaino for Council District 15.

Vote Yes on County Measure H. It will actually address the core issues of homelessness that the city is incapable of solving.

And on the Community College District seat 6, vote for Nancy Pearlman, the only independent progressive.

Regardless of what your perspective is on the homeless crisis, you have to admit that after three years of debate in city council, the problem has only gotten worse and the only cure the citizens have is to vote those out who have been an obstruction to curing the problem. Let’s start with Buscaino and his reckless disregard for the desperately poor.