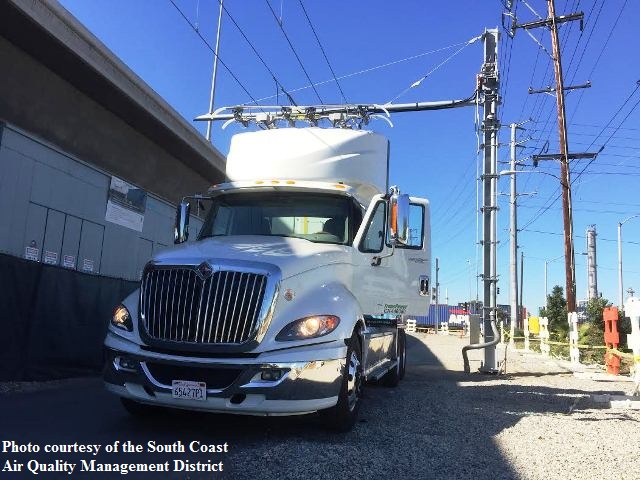 Electric trolleys are icons in San Francisco. Although they are viewed by some as a quaint relics, the basic technology behind them is not. If you’ve been to Frisco recently, you’ve probably seen modern buses that are propelled by electricity from a maze of overhead electric lines.

The same technology, called an overhead catenary system, is going to be tested on full-size cargo trucks in Carson. If the experiment goes well, it could lead to a notable decrease in the emissions of local cargo transport.

Field tests will be conducted this winter and spring. Siemens, an international research and development company, is running the tests, but the project was initiated by the South Coast Air Quality Management District (SCAQMD).

“With goods movement contributing to local air pollution, we thought a catenary system was a good option to test out,” said Naveen Berry, planning and rules manager at the SCAQMD.

For this project, the SCAQMD allocated $4 million; an additional $12 million was provided by the California Energy Commission, the Environmental Protection Agency, Los Angeles Metropolitan Authority and the ports of Long Beach and Los Angeles. Four million dollars came from the China Shipping Settlement in 2003. The settlement between the Natural Resources Defense Council and the Port of Los Angeles allowed the China Shipping port terminal to expand but required environmental mitigations, including funding of projects like the one in Carson.

Three different types of cargo trucks are being tested on the catenary: a battery-powered electric, a compressed natural gas hybrid and a diesel hybrid. The battery-powered truck has a range of 20 miles and was designed by local technology company, Transpower. Two distinct natural gas hybrids are being tested, one from TransPower and the other from a partnership between BAE Systems and Kenworth. The diesel hybrid was designed by Volvo.

“We’ve had previous experience working with these companies, so we were able to leverage that for this project,” Berry said. “These trucks can match the horsepower and torque of a Class 8 diesel with [a] full[y] load[ed cargo].”

Now Siemens and the SCAQMD will be investigating how these trucks interact with the catenary system Siemens built. The pantographs were designed to connect and disconnect from the truck’s overhead wires automatically or manually. Once connected, a truck’s battery or engine will turn off, and the electrical current from the wire will power the truck’s motor.

Current, voltage and other data will be monitored in real-time via Wi-Fi. Data will be collected for six to 12 months.

Berry already expects the catenary to provide at least enough power to enable trucks to haul a full load of cargo. He is excited to discover how much extra power the wire can deliver to the trucks.

“Excess power means that the system could recharge a truck’s batteries,” Berry said. “This could extend a truck’s zero emission range.”

As it stands, the battery truck has a relatively short range. It will be used to make short-haul trips between the ports, rail yards and container yards. If it can connect to the catenary system during a particular trip, and receive excess power, it won’t have to charge as long at a charging station.

The trucks are being tested on a one-mile long stretch of wires along Alameda Street. (Sepulveda Boulevard passes over the track at about the midpoint.) There are two sets of wires, one for northbound travel and the other for southbound travel. The current for the wires comes from a substation Siemens built and manages.

The experiment should have been underway this past year, but engineers had to redesign some of the project’s infrastructure. They initially planned the poles to support the catenary wires be anchored underground.

“We had maps of gas and utility lines and we thought we addressed everything,”  Berry said. “Then after we started digging we found an unidentified pipe.”

Carson, which owns the land, provided the maps to the district. City permits were already completed, so the project continued at that site. Engineers eventually brought in and anchored the support poles on 5- by 5- by 6-feet concrete blocks.

Although the redesign caused a yearlong delay, none of the funders backed out. In that time, the California Department of Transportation, the Los Angeles Department of Water and Power and Southern California Edison—which provides electricity for the project’s substation—expressed interest in the project. Berry said that these organizations want to know how this technology can be adapted for their own needs.

Edison is particularly interested in the results of the project.

“[We] helped assess their grid impact … [future] catenaries could be constructed in a way that would not affect Edison’s existing infrastructure,” Griffo said.

This is good news because for a catenary system to make a significant impact on reducing local emissions, hundreds of trucks will have to use it daily.

“I’m optimistic about the technology,” Berry said. “It looks good from a review and design perspective. Now we’ve got to document it in reality.”