Yes Sally, There Are Still Pat... 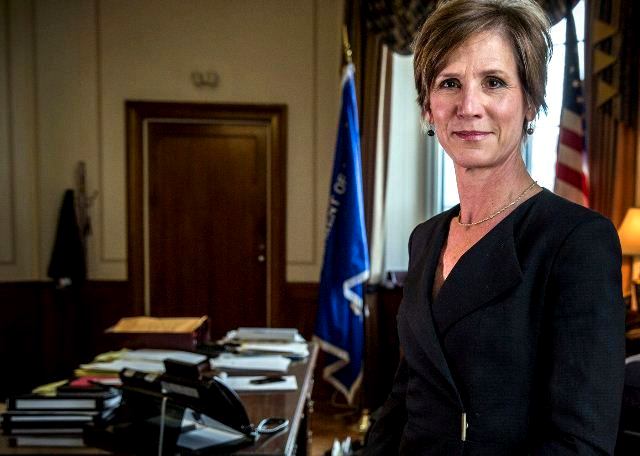 Yes Sally, There Are Still Patriots

You just won’t find them in the White House

“These are the times that try men’s souls.”
—from Thomas Paine’s The American Crisis

It is one thing to pledge allegiance to the flag in the security of a neighborhood council or chamber of commerce board meeting. It is quite another to stand up to the newly-elected president of the United States and tell him that his latest executive order on immigration is indefensible and probably unconstitutional. I call that true patriotism. That’s what the now former-acting U.S. Attorney General Sally Yates did the other day when she directed the Department of Justice lawyers to disobey the executive order. The executive order bans entry to the United States from 7 Muslim-majority countries. Christians are exempt from the order.

“In litigation, DOJ Civil Division lawyers are charged with advancing reasonable legal arguments that can be made supporting an Executive Order. But my role as leader of this institution is different and broader,” Yates said regarding her decision. “My responsibility is to ensure that the position of the Department of Justice is not only legally defensible, but is informed by our best view of what the law is after consideration of all the facts…. I am responsible for ensuring that the positions we take in court remain consistent with this institution’s solemn obligation to always seek justice and stand for what is right. At present, I am not convinced that the defense of the Executive Order is consistent with these responsibilities nor am I convinced that the Executive Order is lawful.”

Ol’ President No. 45 fired Yates. Or, just as likely, the newly-elected’s alt-right-ego and former  white nationalist news blog Breitbart editor-turned-“chief strategist” and newly- minted member of the National Security Council, Stephen Bannon, fired Yates. This only added more confusion to Trump’s executive order on immigration, which has been protested by thousands and challenged in federal court by the American Civil Liberties Union. A temporary stay has been issued by the U.S. District Court judge for the Eastern District of New York on Jan. 25. Now, instead of protecting America from foreign enemies, Trump has become one of the “bad hombres” that he warned us about.  So much for those who have been saying, “just give the new president a chance to prove himself”.

Nyet! I say hurrah for those many thousands who are protesting, chanting, standing up shouting, “No Trump! No KKK! No fascist USA!” and who are now suing this administration.

Ms. Yates heroically upheld her oath of office to support and defend the Constitution of the United States against all enemies, foreign and domestic.

To many Americans, the current occupant of the Oval Office is ignorant of the Constitution he swore to uphold and is driving the nation into a direct collision with the fundamentals of our very liberties. The chaos emanating from the bloviator-in-chief would be amusing if it weren’t so tragic.

He’s even invented a new form of presidential directive — the national security presidential memorandum — and signed three of those.

For those who thought Trump’s antics were just campaign rhetoric, it is clear now that his campaign rhetoric was his real agenda — an agenda supported by “alternative facts,” his alt-right interpretation and his non-existent understanding of the Bill of Rights.

Reince Priebus signed the Memorandum to the Heads of Executive Departments and Agencies, freezing all new regulations; it is clear that this regime is on the warpath to overturn, dismantle or destroy as much of the Obama agenda as it can by executive fiat before Congress can act in the first 100 days.

Trump’s Executive Order 13767 and his Executive Order to “Protect the Nation from Foreign Terrorist Entry into the United States” are just a two of 19 objectionable executive actions. The other messes he’s started includes creating diplomatic rifts with Mexico over his Great Wall; lobbing the opening salvo in dismantling the Affordable Care Act; restarting the Dakota Access Pipeline; and threatening sanctuary cities. (See pg. 10 to read the whole list of Trump’s executive orders thus far.) Trump has cancelled the Trans Pacific Partnership agreement, but his penchant for alienating U.S. allies and rivals alike could have real effects on import industry jobs in the Los Angeles Harbor and consumer price inflation nationwide. In the end, will Trump actually create more jobs?

That the mainstream media should now seem shocked by any of this after promoting his celebrity status and profiting from the TV ratings that Trump generated during the bizarre 2016 campaign is a sad irony.

Even more disconcerting is mainstream media’s late arrival on fact checking and investigating his relationship to Russian President Vladimir Putin or even demanding the release of his taxes. Only now are some mainstream media outlets beginning to use the “L” word when reporting on Trump’s or his subordinate’s lies.

He is just a brand name like Coca-Cola or Twitter: empty of substance and short on communication.  That he is now slamming and abusing the White House press corps is just trumpish exploitation of the way things are in these great post-factual United States of America. Bannon said the other day that the press should, “Just shut up and listen.” As if journalists should be obedient stenographers rather than professional skeptics of the Fourth Estate.

This conflict has been coming to a head for some time as corporate public relation firms have been spoon-feeding journalists “alternative facts.”

The rest of us should not be shocked at the political confrontation now  in play. From the very birth of this nation—beginning with the Boston Tea Party through the Civil War and emancipation of the slaves and every decade and era since—the conflict has been between the rights of the people versus the tyranny of money, property and privilege. Liberty sometimes gets confused with ownership, depending on who owns what or whom.

That Trump is held up as a champion of the neo-Tea Party, neo-fascists and others only confuses both our American sensibilities and our American linguistics, such as they are. Trump is nothing more than an empty Coke bottle full of fizzy colored politics with no moral values.

Making America Great is a slogan, not a course of action or a cure for what ails this country. His inauguration was not much more than an insulting reiteration of his empty sloganeering soaked in sugar water.

However, from this chaos there will rise true patriots and heroes who, like many before Sally Yates, will stand up to speak truth to power and demand libe