American Women Give their Firs... 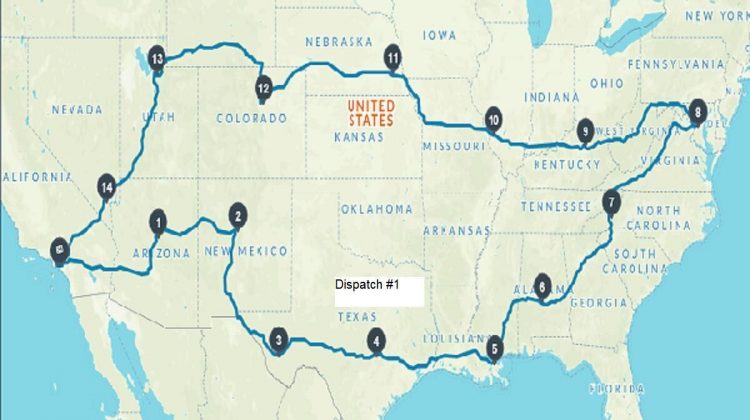 Alyssandra Nighswonger and Nicolassa Galvez are the Road to the American Woman. Their destination was the Women’s March on Washington D.C. on Jan. 21. As they drive across the country the women are capturing the untold stories of women across the nation. Their journey began Jan. 8, from Long Beach. They are traveling to more than a dozen cities on their round-trip.

Galvez and Nighswonger were finally getting into their rhythm when they set off on the next leg of their road trip to the Women’s March on Washington, D.C. from Austin,Texas. They were beset with a few challenges ranging from equipment issues to securing interviews.

On Jan. 20, Random Lengths News published, On the Road to the American Woman, a profile of Galvez and Nighswonger that explains why they are journeying to the nation’s capitol. Click here to read it.

Since taking off on Jan. 9, the pair has faced long days of driving. Then they arrive at a city on their route and have to go right into performing — Nighswonger takes to the stage and plays her music.  Other times, they attend women’s gatherings to listen to their stories. The next day, they repeat the routine. They say they have been well received and are getting good interviews.

“People are really excited for us to be there,” Nighswonger said. “They have been so respectful of trying to find a space, letting us stay there, publish our event. We’ve had a lot of support.”

In Austin, Texas, Galvez and Nighswonger met with a nonprofit organization called Boss Babes ATX. It is a collective that does not discriminate based on careers, serving self-identified women in creative industries.

“They help each other accomplish things,” Nighswonger said. “They’ve provided a strong network for each other. We interviewed between a dozen to 20 women and we actually had at least four or five engineers, which I thought was wonderful. They are proud to be in a male dominated field.”

The common thread linking their female interview subjects has been health care. The women interviewed were concerned about accessibility to birth control, if the prices will rise or if it will be covered by their health insurance.

Galvez’s concern is that they have been talking to moderately successful middle-class women.

She wonders if other classes are maybe more fearful.

“I don’t think some of the women (we’ve spoken to) realize how much of a disadvantage other women have, or maybe women of color have,” Galvez said. “Generally if they’re fairly successful there are definitely challenges they face, but as far as their status as women, I heard that a lot of women generally think we’re doing OK.”

The women also talked about pay raises and opportunity. They said that even though they’re in a male dominated field, engineers in this case, as long as you work hard and ask for what you want you can be successful.

“I personally think that their view might be a little skewed,” Galvez said. “Whether it comes from talking to more women along the trip or we bring in a professor that studies the status of women over all will be important just so that we’re not perpetuating any myths. I’m just realizing this now as I’ve been talking to women. Generally, educated intelligent women still think that as long as you try hard that you will be fine.”

Galvez said she brought various books along because she felt like she needed to keep intersectional feminism in her mind on the trip.

“Even when the person not driving is working, we thought we would have time to get work
done but we’ve just been packing it in getting the locations settled, lodging settled doing what
we can on social media,” Galvez said.
Most everywhere they have visited, they said they have met women who are either going to the march on Washington D.C. or participating in other marches. Nighswonger added that there are many supplemental marches in all the surrounding cities near Washington D.C.

They have been to Selma, Ala, Nashville, Tenn. and North Carolina then onto D.C. for the march.  They continued to interview women along the route back home.
You can find Road to the American Woman scheduled stops updates on their Facebook page. See their itinerary on their website.

Read about how it all started here.  Check out what happened next.