Getting Another October Surpri... 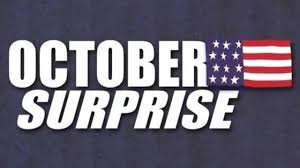 Getting Another October Surprise

In an era of fake news, disinformation and propaganda, the pursuit of the truth is invaluable, if not essential

This past election cycle brings me back to November of 1980, when Ronald Reagan was elected president. Random Lengths News was newly established.

The October surprise involving the hacked emails of James Podesta, the chairman of Hillary Clinton’s campaign, are far too reminiscent of the 1979 U.S. Embassy hostage crisis in which 52 American diplomats and citizens were held hostage for 444 days by Iranian students belonging to the Muslim Student Followers of the Imam’s Line.

Abolhassan Banisadr, the former president of Iran, has stated “that the Reagan campaign struck a deal with Tehran to delay the release of the hostages in 1980.” He asserted that “by the month before the American presidential election in November 1980, many in Iran’s ruling circles were openly discussing the fact that a deal had been made between the Reagan campaign team and some Iranian religious leaders in which the hostages’ release would be delayed until after the election so as to prevent President Jimmy Carter’s re-election.”

This truth wouldn’t become publicized until the New York Times blew the lid off the Iran Contra scandal and the release of Banisadr’s memoir of the incident, My Turn to Speak: Iran, the Revolution and Secret Deals with the U.S. 10 years later.

Donald Trump, like Reagan before him denied any pre-election negotiations with foreign governments to influence these elections. But much can be read into the defense of a man who protests too much.

At this point, we can only surmise that the Trump campaign was working in concert with Russian President Vladimir Putin to discredit Hillary Clinton during the final weeks of the 2016 general election. But this supposition was solidified by the CIA and 17 of national security agencies in a late arriving report.

Who knew there were so many “intelligence” agencies protecting us? What we do know is that all of this “intelligence” hasn’t made our republic any safer or smarter in the face of cyber attacks and political treachery.

Yet, this is precisely the same kind of political treason that has been used time and again to defeat Democratic candidates­. It must have been codified in the Republican playbook.

Nixon used this same play to derail Hubert Humphrey’s presidential campaign in 1968 by delaying the Paris peace talks on ending the Vietnam War — a war that ultimately didn’t end until seven years later in ignominious defeat.  Nixon campaigned on his “secret plan to end the war.” It turned out the secret was simply using Henry Kissinger to delay any deal prior to the 1968 election. The rest — as they say— is history.” Now, we are condemned to repeat it.

Clearly, all three of these historic October Surprises were successful attempts at disrupting the electoral processes of our nation, influencing the vote and misinforming the public before the truth could be widely known or published. This will be the template by which a Trump administration rules. The Office of Public Diplomacy is one of those pages out of the Republican handbook that the Reagan administration used for the express purpose of producing propaganda.

According to staff report on Otto Reich (a senior official in the administrations of Reagan, George H.W. Bush and George W. Bush), released by the House Foreign Affairs Committee in Sept. 7, 1988, investigators concluded that:

… senior CIA officials with backgrounds in covert operations, as well as military intelligence and psychological operations specialists from the Department of Defense, were deeply involved in establishing and participating in a domestic political and propaganda operation through an obscure bureau in the Department of State, which reported directly to the National Security Council rather than through the normal State Department channels….Through irregular sole-source, no-bid contracts…established and maintained a private network of individuals and organizations whose activities were coordinated with, and sometimes directed by, Col. Oliver North (of Iran-Contra fame), as well as officials of the NSC. These private individuals and organizations raised and spent funds for the purpose of influencing Congressional votes and U.S. domestic news media. This network raised and funneled money to off-shore bank accounts in the Cayman Islands or the secret Lake Resources bank account in Switzerland for disbursement at the direction of Oliver North. Almost all of these activities were hidden from public view and many of the key individuals involved were never questioned or interviewed by the Iran/Contra Committees.”

This, my friends, is what we are going to see recycled as foreign and domestic policy by the Trump administration. So readers, beware!

In this era of fake news and disguised propaganda, it will be difficult at best and impossible at worst to determine who’s telling the truth.

My greatest fear at this point is that there will be a Trumped up 9/11-style attack, initiated by our Tweeter-in-chief, who would then rally white-supremacists patriots to the cause of our next war of aggression. He might impose martial law for the sake of national security and defense of the homeland, and it will all be packaged in a way to make you feel that Trump is making America great again.