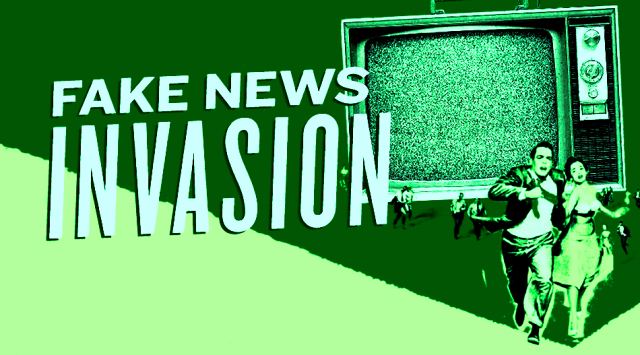 Fake News and the Rise of the False Alt-Press

Social media and the cause of fact-less opinions Christiane Amanpour, CNN’s chief international correspondent, just won an award for championing press freedom. She is also one of the better-known faces in the mainstream media.

In her acceptance speech at the 2016 Burton Benjamin Memorial Award at a Nov. 22 gala in New York — an event organized by the Committee to Protect Journalists—she said about her fellow journalists’ coverage of the recent elections:

Much of the media was tying itself in knots trying to differentiate between balance, between objectivity, neutrality, and crucially, the truth. We cannot continue the old paradigm. We cannot, for instance, keep saying, like it was over global warming. When 99 percent of the science, the empirical facts, the evidence, is given equal play with the tiny minority of deniers.

She took note of the president-elect’s tweets accusing the media instigating the uprising of protests:

I was chilled when [Trump’s] first tweet after the election was about professional protesters incited by the media. [Because as we all know] First the media is accused of inciting, then sympathizing, then associating. And then, suddenly, they find themselves accused of being full-fledged terrorists and subversives. And then, they end up in handcuffs, in cages, in kangaroo courts, in prisons and then who knows what.

A sentiment with which I couldn’t agree more.

In another tweet, Trump alleged that 3 million illegal voters cast votes in an election he won, albeit losing the popular vote to Hillary Clinton by some 2.5 million votes—a number that continues to grow.

It was only after Trump called the leading national journalists to his “Tower” for a scolding about their treatment during the campaign and the New York Times stood up to him that other major media companies began tentatively calling him out on his lies, false accusations and otherwise aberrant pronouncements.

On Nov. 5, the Toronto Star newspaper published their list of Trump’s lies—494 in all that fell into 20 different categories. They wrote, “the category that has the most falsehoods is ‘Clinton’s policies,’ followed by ‘Clinton’s corruption,’ and then polls.”

That list is far too long to be printed here but can be found on Slate.com  at http://tinyurl.com/Trump-s-lies.

Since that time the presumptive president-elect has backed off on his pledge to prosecute Hilary, appoint a special prosecutor and throw her in jail. However, no one can be quite sure exactly what Trump will say next or even if he’ll do what he says next.

This of course is his real talent:  keeping everyone on edge. A negotiating trick that keeps everyone one guessing until the deal is done.  Stand back from the anxiety of the campaign and the depression from the election results to see Trump for the wheeler-dealer huckster he is.

I was reminded this week of a quote from one of our nation’s most celebrated journalists, H.L. Mencken, who in 1920, had the prescient vision to write:

The larger the mob, the harder the test. In small areas, before small electorates, a first-rate man occasionally fights his way through, carrying even the mob with him by force of his personality. But when the field is nationwide, and the fight must be waged chiefly at second and third hand, and the force of personality cannot so readily make itself felt, then all the odds are on the man who is, intrinsically, the most devious and mediocre — the man who can most easily adeptly disperse the notion that his mind is a virtual vacuum. The Presidency tends, year by year, to go to such men. As democracy is perfected, the office represents, more and more closely, the inner soul of the people. We move toward a lofty ideal. On some great and glorious day the plain folks of the land will reach their heart’s desire at last, and the White House will be adorned by a downright moron.

I think at this point the emphasis should be on devious and mediocre—clearly this man, Trump, is not to be trusted either by his own party, the people who voted for him or the rest of us who didn’t.

It is becoming quite clear that it’s very difficult to discern fact from fiction in the media environment in which we live. People say we’re living in a post-factual era of politics, but there are several sources to fact check what you read or hear.

Wikipedia and Snopes.com, however, is the antidote to that. And for those looking deeper into the fictionalization of facts here’s a list of those fake news sites see https://en.wikipedia.org/wiki/List_of_fake_news_websites. And even at Wikipedia, we have to pay attention to who is editing what.

Contrary to the accusations of some trolls on our website, we at Random Lengths News do check our facts. But we do not pretend to be neutral.

This newspaper has always defended its brand of informed political reporting. Our progressive reporting is not blindly partisan, but is informed by a perspective not commonly found in the corporate mainstream press.

This paradigm is now changing. We now live in a world where ultra-right wing and neo-fascist ideologies threaten even the middle-of-the-road media. Breitbart News is a leading example of this phenomenon and the elevation of  Stephen K. Bannon to the position of chief political strategist for the Trumpster—with an office inside the White House is disconcerting.

Bannon’s claim to fame is his role as the executive chairman of Breitbart News,  a media outlet filled with what the New York Times called “ideologically driven journalists,” that has been a  source of controversy “over material that has been called misogynist, xenophobic and racist,” and was a “potent voice” for Trump’s presidential campaign.

Breitbart News has been misidentified and normalized by calling it “alt-right” media; it has been aligned with European populist right wing and what I would call fascist politics. This invention of alt-right news of course is the reaction to the myth of the “liberal media” in America.

With the birth of Roger Ailes’ Fox News, there’s a growing rant that “all of the media are a bunch of liberals.”

Information wars between left and right perspectives are fueled by the increasing use of disinformation—leaked or hacked information from dubious sources and the growing distrust of the media in general.

What has clearly evolved out of this past election cycle is that some media platforms have become “weaponized” for use in disinformation warfare—a tactic that has its roots in the CIA’s covert operations from the Cold War Era.

This, at its very core, is a threat to our democracy and the institutions of electoral politics.  It is curious that these very same tactics are being brought home to roost in the very same chicken coop from which they were hatched—Washington, D.C.

And all of this confusion effectuated by the rise of social media and convenient hand-held devices has only brought us closer to the truth that all democracies are fragile and dependent upon a public being able to deconstruct the information provided. Therein lies the great divide separating America today. What media outlet do you trust to tell you the truth?