Exposing Injustice at the LA R... 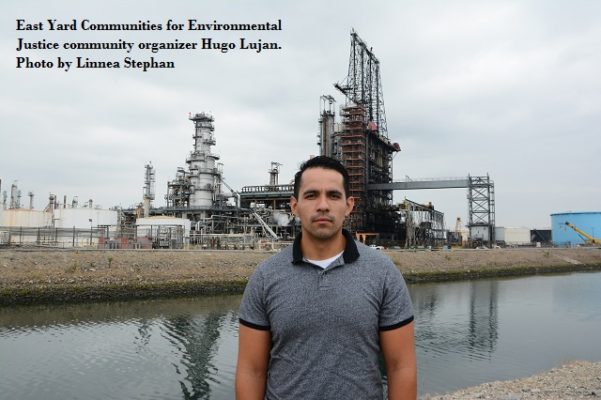 Exposing Injustice at the LA River 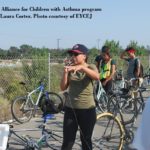 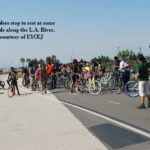 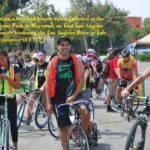 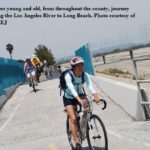 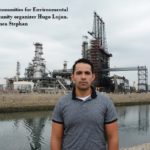 A Bike’s-Eye View from Maywood to Long Beach

More than a 100 bicycle riders gathered at Riverfront Park in Maywood, an East Los Angeles community bordering the Los Angeles River in July.

Riders young and old, from throughout the county, were checking and rechecking their equipment and provisions such as bottled water and snacks. They were preparing for a 17-mile bike journey along the Los Angeles River to Long Beach. Although it was a sunny summer day, this wasn’t a ride to simply take in the beauty of the local environs. This was a bike ride intended to uncover the ugly environmental injustices committed in this part of Los Angeles.

Mark Lopez, the director of East Yard Communities for Environmental Justice, along with the organization’s young members, organized this LA River Toxic Tour.

A native Angeleno, Lopez noted that he’s driven every stretch of freeway that crosses this Southern California basin many times over. However, being on a bike offers a different perspective.

“Riding through our communities lets us know what they are really like,” Lopez said. “The heat. The smells. The heavy air that’s hard to breathe.”

The tourists first met up at the East Los Angeles Civic Center, which is close to the intersection of the 60 and 710 freeways.

“Those freeways tore through our communities,” Lopez said. “Families had to move to make room for [them] and some did not find another place around here to live.”

“They pushed to divide us from each other,” added Hugo Lujan, community organizer for East Yard.

The two freeways are extensively used by trucks hauling items to and from the ports of Long Beach and Los Angeles. The trucks, in conjunction with rail yards and warehouses, process 40 percent of all imports to the United States.

“If you see a train go by here, you might see it again in Chicago or Oklahoma,”  Lopez said. “That plasma TV you buy at Walmart goes by my house.”

The resulting pollution has caused increased cancer rates for the surrounding communities, which are mostly comprised of working class and Latino residents.

“If our neighborhoods are going to have industries and infrastructure here, we shouldn’t have to be impacted this way,”  Lujan said. “We should benefit too.”

During the ride, East Yard members shared a brief history of the Los Angeles River. It is a history of displacement, of the river itself, and also of ecosystems and communities. The Los Angeles River was once very dynamic, changing its course with the seasons, and flooding periodically. Nevertheless, it supported indigenous villages, until the arrival of the Europeans. The villages were displaced by Spanish and Mexican pueblos and ranches, and eventually by American settlements.

Americans didn’t like that the river was prone to flooding. So, unlike the previous inhabitants, they did something radical about it.

“Instead of the community adjusting to the river, the [U.S. Army Corps of Engineers] and the City of LA adjusted the river,” Lujan said.

In the 20th century, the course of the Los Angeles River was fixed by paving under most of it with concrete. Extensive flood control measures were also implemented.

“The river used to flow out to San Pedro Bay [or Santa Monica Bay],”  Lujan said.  “But they shifted it here. Why? Well it happened to be an awesome dumping resource for the industrial companies around here.”

The park in Maywood where the tour stopped for lunch was one of those industrial sites. A company called Pemaco blended chemicals there; hazardous waste products eventually leaked into the groundwater and the soil beneath the facility. In 2005, the land was declared a superfund site by the federal government. This means it was among the most contaminated pieces of land in the United States and had priority for remediation. It has since been cleaned up enough to be incorporated into the park, though it is still monitored.

The California Department of Toxic Substances Control keeps data on parcels of land in the state that need environmental remediation. The department’s maps show that adjacent to the river are several more superfund sites, state-managed cleanups and schools under investigation for dangerous levels of pollutants.

But of all the Los Angeles River chemical dumpers, Exide Technologies was one of the most prolific. Exide had a battery recycling facility in nearby Vernon until 2015. For more than a decade, the facility severely neglected to contain arsenic, battery acid and lead. Since 1996, the California Department of Toxic Substances Control noted numerous violations at the facility, but it failed to act until recently.

“The state agency allowed those violations,”  Lopez said. “We fought for years until the feds heard us and stepped in. They found decades of felonies [committed by Exide].”

After it acquired the data from the California Department of Toxic Substances Control, the U.S. Department of Justice could have brought a case against Exide. Instead, the department allowed Exide to avoid prosecution by agreeing to shut down the facility and to clean it up.

East Yard considers the shutdown of the facility progress, however the organization’s role is often not given credit.

“The [California Department of Toxic Substances Control] has tried to claim responsibility for what happened with Exide,” said Lopez. “We have had to make them stop presentations and change them [to recognize us].”

The clean up of Exide and the surrounding neighborhoods has yet to be completed. But California Gov. Edmund G. Brown recently proposed $176.6 million to expedite the process.

“Everyday we have to keep fighting for victories like this because every day [pollutants] are in our blood, in our river and in our communities,” Lopez said.

During the approximately two-and-a-half hour ride from Maywood to Long Beach, participants got a good sense of what the communities along the river have to live with. Incessantly permeating neighborhoods are dingy factories and warehouses, miles of rusty train tracks, and swaths of dirt and dried weeds. Broken glass and pebbles kicked up by heavy trucks were dispersed throughout the streets and parts of the bike path. Lopez grimly joked that between our first and second stop, we had more flats than miles covered.

Tourists also learned that the cities we passed through often had “food deserts.” This means that residents do not have access to nutritious foods within walking, or even short driving distance.

“Whole Foods and Trader Joe’s trucks roll through here, but they don’t stop,” said Andrea Luna, a member of La Cosecha Collectiva. “[So] we don’t depend on them.”

La Cosecha Collectiva is a response to the “food desert” phenomenon. It’s a community group which collects organic food grown in gardens across the lower Los Angeles River region and distributes it evenly between members. La Cosecha has about 25 food-producing households. Its next project is to develop methods that will allow apartment dwellers to also produce food.

At the northern edge of Long Beach, a speaker from the Long Beach Alliance for Children with Asthma told riders about its collaboration with the University of Southern California to raise awareness about air pollution.

“Across from us is the 710 Freeway, which is a major source of ultra fine particles,” said Laura Cortez, program coordinator for the Alliance. “We go into the homes around here with P-TRAK meters to measure the [density] of those particles.”

Ultra fine particles are the most dangerous particles emitted by vehicles exhaust due to their size. They are too small for human nose hairs and mucus membranes to trap. So as we breathe, the particles travel into our lungs, diffuse into our cells and can even reach our DNA. This can lead to asthma and possibly an increased risk for heart attack and stroke.

“Right now there is no regulation on these particles,” Lopez said. “As part of The [Trade Health & Environment] Impact project, we are using the data we collect to demand changes to air [quality] policy. The color of your skin shouldn’t determine the quality of the air you breathe.”

The entire ride did not focus on environmental degradation. The southern most stop of the ride was at Hudson Park, less than 100 feet away from BNSF’s proposed site of the Southern California International Gateway Railyard. If it had been approved, an estimated 5,500 semi-trucks and eight trains would have been processed there every day. But as covered in the 2016 Earth Day issue of Random Lengths, the project was halted due to a rejection by the Contra Costa County Superior Court. East Yard considered that a notable victory and its members were excited to give an update.

A round of applause followed the announcement. The Southern California International Gateway project is now on hold. But BNSF and the Port of Los Angeles are still trying to appeal the decision.

Another stop in Long Beach at the Dominguez Gap Wetlands, provided tourists with an example of improvements to the land surrounding the river. The 37-acre wetlands were once just a flood control zone, until it was redesigned by the Los Angeles County Department of Public Works.

“We took a mud pit with some weeds that only did one thing, and transformed it to do five things,” said Dan Sharp, civil engineer for the Los Angeles County Department of Public Works.

In addition to flood control, the land provides water treatment, ground-water replenishment, a wildlife habitat for native species, and a public walking space. The project cost about $7.1 million and took two years to complete.           “This type of project can be implemented in other areas, without too much trouble, while bigger plans are being developed to improve the river,” Sharp said.

Such bigger plans were also discussed during the tour by Mark Stanley, executive director for the San Gabriel and Lower Los Angeles Rivers and Mountains Conservancy. In accordance with Assembly Bill 530, a law first introduced by California Assembly Speaker Anthony Rendon, the conservancy is leading a working group to develop a revitalization plan for the lower Los Angeles River. Members of the working group include East Yard, officials from Los Angeles County and adjacent cities, and nonprofits such as Heal the Bay. The plan they are developing is scheduled to be presented in March of next year. Once it is approved by the state, it will be adopted into the Los Angeles County Master Plan.

Members of East Yard are hopeful yet skeptical about the future of the Los Angeles River. While they are in favor of improvements to their environment, they are aware of the river’s historical trend of displacement.

“We need to make sure any vision for the river is community driven,” Lopez said. “When pollution goes down, we don’t want rents to go up. We saw that happen in parts of Long Beach. We don’t want more gentrification. We don’t want art lofts here … the [river] is for us.”