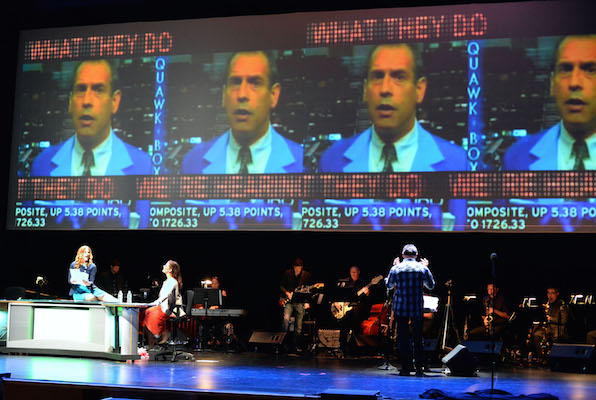 One-trick ponies are a curious species. If they have a good trick and perform it well, their lives may not—may not—be in vain. Otherwise, best to take them out back and put them down.

There’s no getting around the fact that The News is a one-trick pony. Composer JacobTV recognizes what we all recognize: mainstream TV news reportage has largely morphed into infotainment. The most impactful events and gut-wrenching tragedies are deep-fried and served up as sound bites and video clips by anchorpersons who spend more effort making sure their outfits and makeup are just right than educating themselves.

With The News, JacobTV has packaged this idea as plotless operatic spectacle (could there be a more fitting frame for today’s world?) conflating actual news coverage with music and movement meant to highlight the absurdly trivialized distillation of world events by a never-ending network news cycle that pauses only to hawk products such as hamburgers and artificial tears.

It’s a good trick, and for the first half of The News it’s generally well executed. But one-trick ponies often keep the stage too long, and for the last third of the show we feel like we’ve been there and done that.

Several elements of The News are good for the duration. Front and center are the two “anchors,” “rhythm vocalist” Loire Cotler and soprano Maeve Höglund. There isn’t a single vocal misstep between them. Höglund makes her sometimes soaring vocal flights seem easy, and Cotler alternates between machine-gun syllabification and tuneful warbles with mechanistic precision. Together they effectively skewer the reportage we see/hear onscreen, their individual efforts perfectly complementing each other. The only failing here is the sound mix. While the music (effectively performed by a nontet including two horns, electric guitar and bass, and digital beats) is passably balanced, Cotler and Höglund are too quiet, not so much layered in with everything else as a slightly buried.

The video element of The News is excellent. JacobTV has not only collected just the right news clips to make his case, his edits and effects (often reminiscent of Max Headroom) bring out the best angles. There’s most always something compelling onscreen. Some of the show’s most affecting moments, in fact, are when the subjects of field interviews in calamity areas are allowed to speak for themselves, with JacobTV’s music providing fitting ambiance. It’s inspired counterpoint to the kind of coverage these crises typically get from network infotainment. “I just want to know: why is [Assad] shelling us?” asks an 8-year-old boy standing after describing the gory deaths of relatives and neighbors from Syrian barrel bombs. “For the law of the powerful over the weak? Just for that?”

Where The News fails is where JacobTV seemingly runs out of ideas. The show opens with “You Know What?”, featuring Cotler and Höglund behind their anchor desk satirizing the Fox News-style of topical chatter that doesn’t actually tell you anything. The third song, “Stock Market”, executes a staccato rhythm reminiscent of a ticker-tape machine as we’re bombarded with visuals of NYSE numbers and financial analysis that is little more than excited speculation. Before long we’re into our first commercial (no less a song than the rest but cleverly timed at almost exactly 30 seconds), then “Si Wang” immediately changes the pace, with stately music and red-flashing Chinese characters blended into news coverage of a terrible earthquake.

Little by little, though, JacobTV seems to lose the thread. His anchors increasingly forsake their anchor roles, becoming generic frontwomen with minimal, uninspired choreography. Perhaps the point is that infotainment anchors are more showbiz folk than news reporters; however, that point was better made while the show stayed true to its central conceit.

Musically, the problem is that JacobTV starts repeating himself, and the score becomes a bit stale. By the last two songs the problem is so pronounced that the video themes are also recirculating. This is not a true bookending (there is no plot arc, and the only structure of any import is the flow), so bringing in a second round of Donald Trump—from what appears to be the same speech, no less—feels like killing time.

JacobTV has a good ear for speech grooves, a good eye for arresting images, a good sense of timing, and a good idea. If this 75-minute show had come in at under an hour, it might have been great. But while less may never be more when it comes to true news coverage, the arts are a different story.

Still, there’s something nice about The News. It may not leave you wanting more, but a strong start and several affecting and charming sections open a better window on our world than your average nightly newscast.