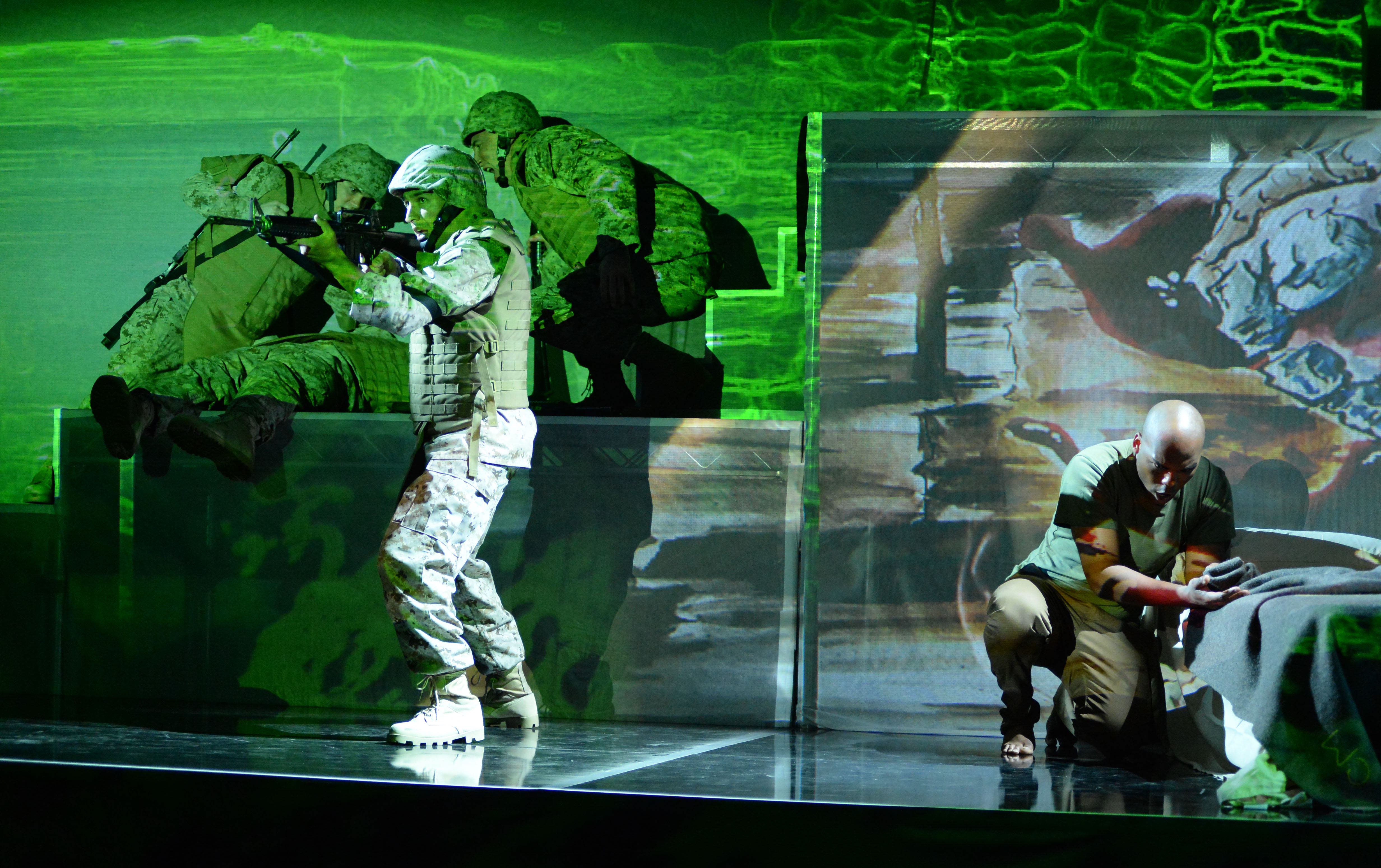 We all know the broad strokes. After 9/11, the George W. Bush administration misled Congress into authorizing the Iraq War, one of the most ruinous missteps in American history, costing the U.S. over $2 trillion and claiming the lives of over 4,000 American troops. That’s nothing, of course, compared to what has befallen Iraq itself, where over 150,000 civilians died for little more than swapping Saddam Hussein’s rule for civil war and an opening for ISIL.

Operatic stuff, to be sure, far too sweeping to be told in any single story. So Tobin Stokes and Heather Raffo do well to take on “Operation Iraqi Freedom” (America, fuck yeah, here to save the motherfucking day) by focusing on a narrow slice of life in the eponymous city and how it reverberates for a young U.S. Marine and a younger Iraqi.

USMC Lance Corporal Philip “Houston” (LaMarcus Miller) is already confused about whether Iraqi civilians should be regarded with compassion or fear, when four U.S. contractors are brutally killed, setting the stage for a major incursion by U.S. forces. While on patrol Philip encounters Wissam (Jonathan Lacayo), a boy more interested in gaining some understanding of why his family is being chased out of their ancestral home than in fighting. Months later Philip is stateside and suicidal, shattered by the death of fellow Marine Taylor (Todd Strange) and his own murdering of Wissam’s mother, Shatha (Ani Maldjian).

Why Philip kills Shatha—or even exactly how it happens—is a mystery to me. If I’d seen Fallujah on DVD, I’d be going back over this part to see whether I missed something, but all I can tell you right now is that, as staged here, Philip’s killing Shatha seemed like a part of the plot to be fleshed out at a later date. Fallujah is not especially plot-driven, though, so this lack of clarity is more puzzling than fatal (no pun intended).

What drives Fallujah is the trauma of war. The center of Fallujah is the hospital room where Philip is on 72-hour watch after his suicide attempt, while just outside the door his mother (Suzan Hanson) waits to see him, struggling to grasp how he has been changed by his wartime experience. Fallujah is a world away now, but its effects are lasting, both at here home and back where the now motherless, homeless Wissam will come of age.

On the emotional front, Fallujah is effective enough. Musically there is probably too much recitative (my least favorite thing in opera), and much of Act One’s music seems unfocused. But Fallujah gets stronger as it goes, largely due to the increased focus on the roles of the two mothers. Stokes’s strongest compositional turns are his evocations of tenderness, and so as the mothers get more involved, Fallujah takes flight. The pinnacle is reached after Shatha’s murder, when she wonders from beyond the grave how she can possibly leave her son, while months later Philip’s mother wonders how she can help put hers back together. Both Maldjian and Hanson excel, and Fallujah is never better when they’re singing together.

Raffa’s libretto is awkward in places. No doubt most Marines say “fuck” plenty, but in Fallujah singing it sometimes sounds like old folk trying to emulate how kids talk today, an impression augmented by lines like Philip’s singing, “My mother was a whore,” which feels like it’s coming out of mouth of a character in 19th-century lit than a 21st-century Marine. Raffa has come up with a compelling frame for discussing the tragedy of the Iraq War; she just hasn’t quite found the perfect words for it.

Structurally, Stokes employs abruptness—something you don’t typically get in opera—to great effect in two scenes. The first is Taylor’s death. Although to this point Taylor has been a minor and unsympathetic character, his sole solo comes as over a picture of his 1-year-old daughter he laments that does not know him at all. Suddenly, he is dead, his face blown off by a sniper shot. We get nothing graphic here, but the sudden shift of emotional focus has its way with us. A similar effect is achieved by Fallujah‘s finale, when a short, simple melody is ended almost as soon as it’s begun, leaving an ambiguous apropos of the story and general subject.

Fittingly staged in the U.S. National Guard building (commonly referred to around town as “the Armory”) at 7th and MLK, Fallujah is the latest entry on the list of Long Beach Opera’s site-specific operas. Hana S. Kim’s video design usually works—especially nice are the projections that more or less envelop the audience on three sides—although on occasion jaggedly rotating images (to indicate distress) are a bit obvious. Equally obvious is how good the stage direction during the one scene when Andreas Mitisek has members of Philip’s platoon move up the aisles to vocalize within and behind the audience, creating a bit of surround sound. It’s curious why Mitisek didn’t exploit this possibility more often.

There’s an important idea at the heart of Fallujah, and Act Two features some particularly strong music. If Stokes and Raffo use their world premiere as a launching point, don’t be surprised if in 10 years Fallujah is stronger overall than it is today. Unfortunately, Fallujah will be as deadly relevant a decade from now as it is today, because the traumatic effects of the Iraq War will be with us for generations.