Einstein!: A Portrait Of A Man We Know Too Little About 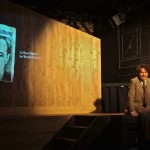 Stage photos are by Peggy O’Neal 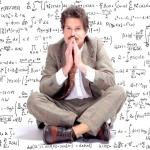 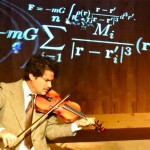 Stage photos are by Peggy O’Neal

Can you name one Nobel-Prize-winner of the last century, of any century, who has been immortalized as a Chia Pet?

One great scientist who is remembered by millions for sticking his tongue out at a photographer? One who is known more for the unruly hair-style on his head than for what he had inside that head?

Yes, that’s Albert Einstein, theoretical physicist, Zionist, pacifist, violinist, whose most famous formula, “E=mc2, is just about all most people know about him. His theory of relativity has created the modern world, everything from space travel to the cell phone in your pocket, but even many current physicists can’t quite understand Einstein’s theories of light, of gravity, of time, and things he spent years thinking about, including a Unified Field Theory. (Those of you who know what that is: congratulations!)

Einstein is a figure so divorced from reality that it is hard to know him. He had a charming side, disingenuous, humorous and even playful, but he also was one of the fathers of the A-bomb.

Who was this man, how did he live and love? That’s what Jack Fry shows us in his one man show Einstein!, currently at the Lounge Theatre in Hollywood. (It was taken on a six-city tour to Canada earlier this year.)

Fry is Einstein as a young man, 35, with problems caused by his unhappy family life, the beginning of World War I (he was a pacifist living in Berlin), the still unanswered question of whether his theory would be proved by several scientific expeditions photographing eclipses and by having his discoveries — the only real way he has of supporting himself — stolen by others.

This is an Einstein of a very different shape and color, not the mature scientist of the years at Princeton, but a man still struggling to survive and sort out his life. Will his wife Maric agree to their divorce? How does he relate to his son Hans, coming of age and rarely having seen his father? These are things that you never think of when dealing with Einstein’s life, but they were very important to him, even as he developed the theories that made him immortal.

Fry’s Einstein has come back from the past to sort these things out and Fry plays not only the physicist but a variety of characters in this tour-de-force, everyone from his son Hans to several of the great men who support and attack him. Fry has devoted much time to his role: he even learned to play the violin (he took lessons in Santa Monica) to flesh out the role. He is handsome, charming as Einstein must have been. Einstein, who worked in Berlin even as the German world collapses around him and waited not too patiently as four expeditions try to take pictures of stars during a solar eclipse to prove his theory right. Meanwhile he has to deal with the hyper-competitive world of physics, and on a screen behind him he shows some of the newspaper headlines that were printed refuting his ideas, until those ideas finally were proved in 1921.

This is the master as he hasn’t been seen before, in the middle of life, doubting and struggling and waiting, accepting his Nobel Prize so the money can go to Maric for the divorce but noticing that it wasn’t for his discovery of relativity, occasionally peevish and beside himself, finally triumphant.

Einstein! is an intimate and well-researched portrait of a man we know too little about. Moreover, it is a glorious evening’s entertainment, a personal triumph for Fry and for the reality of science we know so little about.