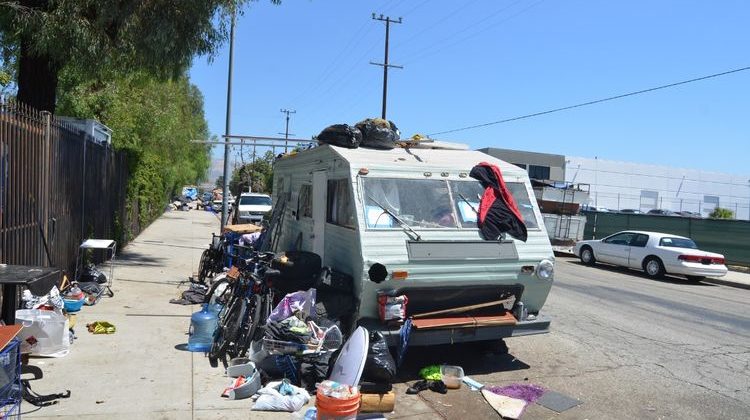 This is my street and you’re sleeping on it!

Some years ago, I was having a drink down at Ante’s bar on Palos Verdes Street in San Pedro when one of the older patrons went off on what makes America the greatest country in the world.

“Capitalism! That’s what makes us free,” he said.

I thought for a moment and started slowly asking him just how he arrived at this conclusion and at the bar that day.

“In my car of course,” he replied.

“And you drove that car here on a public street?”

“And you had to cross the sidewalk when you got out of the car?”

He was certain of this also and I then asked where he went to high school.

“Pedro High and proud of it,” he said.

This went on for a while longer.  “So what’s the point?” he asked.

I then explained to him that all of these things I was asking him about, including the ice in his cocktail were a part of the public domain — the part that “we the people” own or are run for the benefit of the general public — rather than for the benefit of private corporations.

Still not quite getting it, he says, “So what?”

Then I explained that when the government owns things like the ports, the Department of Water and Power, the schools and the streets —this is not capitalism.

Curious, he then asked, if this is not capitalism, then what is it?

“Well, you’re not going to like the answer but it’s actually a form of socialism,” I told him. “And, if you include the U.S. Defense budget  (which is the largest part of government spending), it makes up some 30 percent of our economy. So strictly speaking, America isn’t just a ‘capitalist’ country.”

The patron proved my prediction right. He didn’t like this answer and our discussion got rather heated. The regular longshoremen sitting at the bar nodded in slow agreement but said nothing and the bartender listened intently while pretending to wash glasses.

“In fact,” I went on, “the U.S. military is the largest socialized spending program in our country as it provides health care, food, housing, education and work for every service member and their families.” Only recently during the Iraq War did significant portions of these get “outsourced” to private enterprise.

The conversation drifted on into the evening with the man not convinced. I paid my tab and left through the classic wood doors out onto the sidewalk only to see a homeless man camped across the street. Years later, after the bar and restaurant owner Tony Perkov died,  the restaurant closed and the property was sold. This address became ground zero for San Pedro’s homeless crisis.

Ante’s restaurant may be one of the next historic buildings in old San Pedro to be gentrified out of existence and its history erased.

The sidewalk as public domain

For the past several years, as the population of people without shelter has become more visible, our neighbors have taken refuge near our only federal building — the U.S. Post Office. Robert Nizich, a local lawyer who rents the corner office upstairs, has made it his weekly duty to assess and comment on the population obstructing the public domain of the park and sidewalks surrounding the post office, not even a block from Ante’s. His continued complaints are directed at the San Pedro City Hall just one block north of his office and to the current city councilman Joe Buscaino, whom he blames (among others) for “doing nothing” about the homeless obstructing the sidewalks.

In reality, Buscaino’s office has spent huge sums chasing around his district people without shelter with the help of the Los Angeles Police Department, the L.A. Sanitation Department and L.A. Homeless Services Authority. His efforts have born little fruit as of the last Homeless Services Authority count.  The official homeless count only decreased in San Pedro by what might be considered the margin of error.  And, only when Mayor Eric Garcetti announced his “Bridge Home” initiative earlier this year, and after the 9th Circuit Court of Appeals ruled against the City of Boise, Idaho, did Buscaino change course.

The Ninth Circuit Court panel held that, as long as there is no option of sleeping indoors, the government cannot criminalize indigent, homeless people for sleeping outdoors on public property, on the false premise they had a choice in the matter.

So, clearly the police cannot arrest their way out of the homeless crisis, the L.A. Sanitation Department can’t sweep it under the rug or haul it away and Robert Nizich and his followers are still demanding a solution. The city still doesn’t have enough shelter beds, while the numerous municipal anti-vagrancy laws throughout the state of California  have been ruled unconstitutional.

The City of Los Angeles has been wringing its hands over this problem ever since the Central San Pedro Neighborhood Council passed a resolution endorsing the building of tiny homes. The backlash and uproar caused a reverberation far and wide, and motivated the county and the city to pass two bond measures worth a couple of billion dollars to build and provide support services. While bond measures and homeless initiatives are steps forward, what matters most are real actions.

As of the homeless count at the beginning of this year, the number of people living in their cars just in San Pedro is about the same as those living on our sidewalks and parks. The city has yet to address this issue by opening up any of its many publicly owned parking lots and new shelters in the 15th Council District. Quietly and without fanfare the good people of faith up at Temple Beth El in the Weymouth Corners neighborhood of San Pedro have voted to open up their parking lot overnight. This is just a small start to actually doing something rather than talking about doing something.

While this is a small first step “pilot project” for less than 10 cars, it is supported by the L.A. County Supervisor’s office with some initial funding.

I endorse and support the leadership at Temple Beth El for their courage in turning their beliefs into action and hope that more in the local faith community reflect on this example and follow suit.

As to the question of what makes America good or “Great,” I believe the difference is made by good people finding the courage to do small things that turn out great.

Wilmington Job and Safety at Refineries