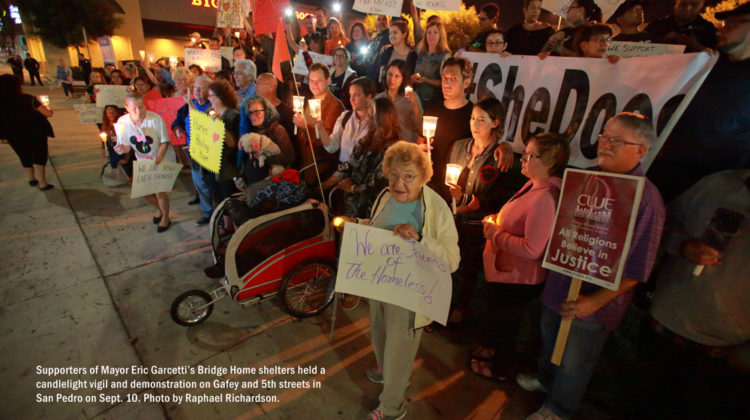 More than 110 people from San Pedro and neighboring communities impacted by chronic homelessness showed up, Sept. 10,  at Gaffey Street Rite Aid in San Pedro to be a voice for unhoused people struggling with poverty.

The demonstration was a response to a prior protest against the proposed new bridge home shelter at 515 N. Beacon St.

The initial protest, which took place Sept. 8, was organized by Saving San Pedro, a group displeased with the prospect of “vagrants” in San Pedro.

“#SavingSanPedro is saying the homeless should be on Terminal Island,” said #SheDoes Movement’s Mel Tillekerapne, who organized the Sept. 10 demonstration. “It’s desolate. It’s two and a half to three miles away from where most homeless people in San Pedro are.”

At the Sept. 10 demonstration, Councilman Buscaino’s Director of Communications Branimir Kvartuc said that the mandate for the bridge home came from the mayor’s office, which requested that the facility be placed where there is highest concentration of homeless people.

There are not enough beds in the city to accommodate these numbers and, as such, the city cannot enforce ordinances that would disallow people from sleeping on the streets.

Eleven years ago, city officials agreed to stop arresting homeless people for sleeping on the streets; in June of this year, Mayor Eric Garcetti stated that he believes that enough housing has been built to allow the city to not resume arrests, but ticket offenders.

Tillekerapne said that the bridge homes are only the first step: getting people off the streets.

Kvartuc added that the bridge homes would offer a variety of services similar to that in permanent supportive housing programs, including being connected to mental healthcare and substance abuse recovery.

It’s called “housing first” and according to Endhomelessness.org it’s the recovery-oriented approach to ending homelessness; it suggests that independent and permanent housing should be given to people regardless of addictions, mental health issues and most sorts of criminal records.

“For a person [who] is homeless, the solutions is homes,” Tillekerapne said.

However, he remarked that in Los Angeles, housing comes too little, too late.

Leader of the bridge home work group Amber Ginsberg said the solution is to open more housing such as the Dolores McCoy Villa on South Firth Boulevard in Watts.

“The bridge home would include wrap-around services we see in permanent supportive housing like McCoy,” Ginsberg said.

She said that the bridge home programs will mirror permanent housing programs.

Ginsberg said that she believes that the Bridge Home opponents minds and hearts would be changed if the group were to tour the permanent supportive housing development in Watts in order to better understand how these facilities fulfill their purpose and what exactly makes programs like these important.

Christine Mendez told community members who toured the facility housing the program on Sept. 6, that the most important feature of the Permanent Supportive Housing Program is that she got to keep her children. Mendez was on the waiting list for six months before getting an apartment at the McCoy Villa. She said the initial process was discouraging.

“I felt like it wasn’t going to happen for us,” Mendez said.

She said that she often couldn’t see the light at the end of the tunnel due to family struggles, under-employment and non-sobriety issues.

Mendez said she was doing illegal things in order to pay more than $1,300 for rent prior to being given a lease at The McCoy Villa. Mendez finally had the resources and the motivation to be sober and become more stable.

Ginsberg said Mendez’s story is not an anomaly by any stretch of the imagination.

“Once people are stabilized, they can work on all the other things that were previously holding them back in other ways,” Ginsberg said.

Ginsberg also said that she believes that for many homeless people, stability means reunifying ones family.

“It’s simple,” Tillekerapne said, “When you put people in homes and give them safety and security, people stop doing drugs.”

“We understand that housing first is the solution, but in LA County, we are looking at 53,000 homeless people,” Tillekerapne said. “It’s going to take a long time for permanent supportive housing to be built. Until then, we need these bridge housing facilities.”