Merry Wives in the Park Works ... 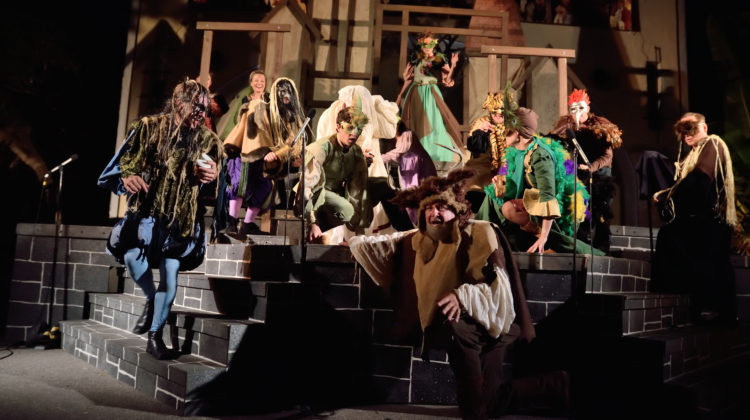 Granted, The Merry Wives of Windsor is universally regarded as one of the Bard’s weakest works. Shakespeare by the Sea certainly know that, but they’re putting it on anyway. When you see the show, the reason is apparent: that very shallowness that lands Merry Wives in such low esteem among scholars makes it easy to follow; and if played right, there are just enough laughs to make this tidy two hours worth your time.

When rotund, dissolute, never-quite-as-clever-as-he-thinks-he-is Sir John Falstaff first graced the stage in 1600 in the two Henry IV plays, he was an immediate hit with audiences, partly because he was Shakespeare at his comedic best, partly because the presence of such a quirky character in a play of some depth makes for interesting dynamics, and partly because the substance of Henry IV bleeds into Falstaff, giving him nuance despite his primary role as comic relief.

So for the only time in Shakespeare’s career he created a new play for one of his old characters. That play is Merry Wives, in which Falstaff tries to woo two respectable married women, while a trio of suitors vies for the affections of one of the women’s daughter. The problem (so scholars say) is that this is not the Henry IV Falstaff but a pale imitation, displaying none of the original’s pathos and little of the wit.

True as this may be (and there’s no way around it), Falstaff 2.0 can still yield a few yuks, and Tom Killam milks the role for every one of them. Killam’s fat knight is a reluctant rogue, somewhat weary of his own mischief yet unable to help himself. “[I]f my wind were but long enough to say my prayers,” he laments after the second of his aborted assignations with Mistress Ford (Ellen Girvin), “I would repent.” But fish got to swim, birds got to fly.

Shakespeare by the Sea always keeps it pretty traditional, and director Cylan Brown has his cast doing Merry Wives in a manner that probably gives us a glimpse of how Shakespeare’s mates played to the groundlings at the foot of the Globe Theatre stage. Every gesture is way bigger than life, and there’s no shortage of ham. But whereas such an approach can be fatal to subtler and more sophisticated works, it’s fitting for trite farce like Merry Wives.

Moreover, considering the environment in which Shakespeare by the Sea performs, that triteness is a sort of strength. Go see a play in place like Point Fermin Park, and it’s a even bet that at least once you’ll be distracted by a car alarm, a helicopter, or (as was the case opening night) a couple of yobs coming close to fisticuffs not 50 yards behind the audience. Shakespeare can be tough to follow under the best of circumstances; throw in a distraction like that, and you might lose the thread. But Merry Wives is so lite that it doesn’t especially matter. Miss a speech or two and you’ll still be fine.

As always, Shakespeare by the Sea fields a fine cast (including Bridgid M. Rose doing a truly mirthful Mistress Page). Diana Mann’s strong costume design and Aaron Jackson’s simple, serviceable set round out the reliably solid sort of show this troupe puts on every summer. And as they do each year, Shakespeare by the Sea alternates staging a lighter work with something heavier. This time it’s The Winter’s Tale. Go see that and you’ll come away being able to talk about a Shakespeare play none of your friends have heard of. It’s fun to show off once in a while, right?