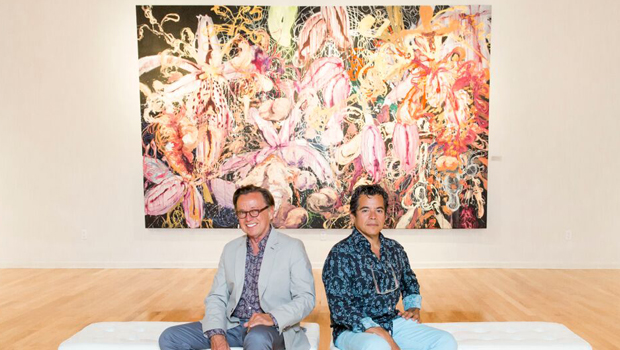 The Palos Verdes Peninsula, with its rolling hills covered with lush trees and fauna, has some of the most beautiful gardens in all of California. It’s a setting fit for the works of artist Ángel Ricardo Ricardo Rios.

This month the Palos Verdes Art Center honors the beauty of nature, with its newest exhibition, A Garden of Excesses. The show features paintings, drawings, and monumental, inflatable sculptures by the artist.

A transplanted Cuban, Ricardo Rios was born in Holguin, and has lived half his life in Cuernavaca, México. “I have been living in Mexico for 24 years, where the city is similar to what you see here in the artwork,” the artist said.

Influenced by the same environment that inspired the art of Diego Rivera and Frida Kahlo, the vivid colors of fruits and blooming plants permeates Ricardo Rios’ creations. His work is a testament to his intense childhood in Cuba, but it shows the colorful experiences the artist has had as an adult in Mexico.

When relocating to Mexico, he arrived in the lush jungles of the Yucatán.

“When I moved to Cuernavaca all this visual experience culminated for me,” Ricardo Rios said. “The union of the location, and the magic and plants came together and began to translate into art work.”

His prior work in Cuba was grounded in the structured art education he received. The nation provides generous support for artists through training, housing and work space. However, the disciplined style of Cuban art did not provide for experimentation. Social themes tended to dominate the style as dictated by the government.

As a young artist Ricardo Rios was part of the generation of the ‘80s, a post-revolutionary generation, born and trained in the revolutionary system. This group began testing its limitations under the watchful eye of a still paranoid young regime, hoping to continue the revolutionary politics of the time.

Early in his career, Ricardo Rios became known for architecturally inspired sculpture. Setting a new direction in the medium, his sculptures moved into a more eclectic form with a series of wild, overstuffed furnishings and inflatable plastic figures.

Most of that is left behind in this new period of majestically proportioned oil and charcoal paintings, which focus on organic form. The work is an explosion of sensuality and passion which radiates an irresistible force. His immense oil paintings are overlaid with broad, wild strokes of color and texture that render the desire he feels for his medium.

Reduced studies in charcoal are assembled in a smaller gallery. These works serve as a precursor to carry the artist’s fantasy toward the unbounded works that initially greet the visitor in the main gallery.

“I believe life is organic, contrary to the industrial,” the artist said. “After having a full career that was socially critical, painting now is like coming back to the origin. It is a private language that is personal and radical. It is pretext to talk about other things like painting and sensuality.”

The exhibition came about after the director of Palos Verdes Art Center, Joe Baker formed a partnership with Marissa Caichiolo of Building Bridges Art Exchange in Santa Monica.

“We started talking to her about working with international artists and she introduced us to Angel,” Baker said.

He met Ricardo Rios in May at the Havana Biennale and arrangements were made to bring the artist to Palos Verdes for this exhibition.

Ricardo Rios career has evolved and he is building an international reputation. He has exhibited extensively throughout Latin America and Europe. For two years Caichiolo has been representing him in Los Angeles through her gallery at Bergamot Station. She coordinated a lecture for the artist at the L.A. Art Show this year and he has an upcoming show at the Juan Ruiz gallery in Miami.

“He is in the middle of a very strong career” said Caichiolo. “I keep getting more solo exhibitions and I feel that in the next five to 10 years he will be well established.”

The exhibition is accompanied by COLLABORATIONS: prints from Mixografia, featuring works on paper by Helen Frankenthaler, Ed Ruscha, Kiki Smith, Rufino Tamayo, Donald Sultan, Jason Martin, Mimmo Paladino, Joe Goode, Kwang-Young Chun and Kcho. The exhibit is presented by the Palos Verdes Art Center in partnership with Beyond Borders Art Exchange and Mixografia Workshop. Both exhibitions are on view through Oct. 4.